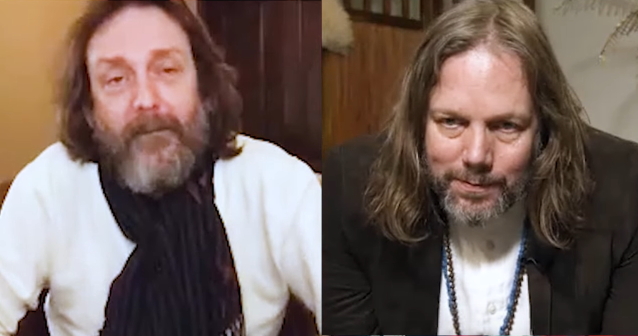 THE BLACK CROWES' CHRIS ROBINSON: 'I Understand Where I Let My Brother Down Over The Years'

Brothers Chris and Rich Robinson of THE BLACK CROWES spoke to Radio.com about the 30th-anniversary reissue of their their multi-platinum 1990 debut album, "Shake Your Money Maker", as well as their upcoming tour. The trek will be the band's first since THE BLACK CROWES officially disbanded in 2014, with Rich Robinson releasing a statement at the time suggesting his brother demanded that he give up his equal share of the band.

Asked about their current relationship, Chris said: "I would say [we have a] great relationship, because I understand — and I'm a man, so I can deal with it — I understand where I let my brother down over the years, where I really should have been his brother, but I wasn't his brother — even though my actions at the time facilitated that. But by the way, that's kind of sometimes… Rock and roll, especially those first 10 years, was mean. You have to be tough. Rock and roll bands are, like — you leave your dead by the side of the road and keep on going, you know what I mean? It wasn't a sensitive place; it wasn't a nurturing place. I'm hardly pretending I'm not unimaginably sensitive and had my own negative or destructive ways of dealing with whatever. I mean, the best part about it is you're creative, you're an artist, so, for better or for worse, you, [through] almost osmosis, you envelope all the things you are, because the people around you and the machine that you are running runs on a lot of emotional energy. To be able to write songs that have emotional connection, no matter what that is — through the music, the melody, the imagery, and then subsequently the recording and the performance and what that means and how that changes. It's a lot."

A year ago, Chris told Planet Rock's "My Planet Rocks" about the differences that led to THE BLACK CROWES' split: "It's funny, I think it was way more personal reasons than musical ones, although we had our musical differences here and there. But just the whirlwind of the first decade of this band and the things we survived — the good things, the bad things — we never had a chance to stop and take any inventory, emotionally or physically [or] mentally. All change is cathartic in nature. But taking that time off and being where we are now, Rich and I having that time apart, has allowed us this opportunity to sort of start again as brothers and be adults and look at each other's lives without resentment and judgment and without any of the issues or hassles of the past. That being said, I think Rich and I, no matter what, the music is always there for us. We have that language together. Rich, when he plays me something, I grab a piece of paper and start humming a melody and we write. That's what we do, when it's time to do that. That was never one of our issues; the music was never an issue, really."

"Shake Your Money Maker" will be re-released in multi-formats sets on February 26 through UMe/American Recordings. Chris and Rich Robinson, with original producer George Drakoulias, oversaw the creation of the re-release. Most exciting are the 4LP and 3CD Super Deluxe versions, which include the original album, remastered; three never-before-heard studio recordings; two previously unreleased demos from the band's early incarnation as MR. CROWE'S GARDEN; B-sides; a spectacular, high-energy 14-song unreleased concert recorded in their hometown of Atlanta, Georgia in December 1990; reproductions of an early MR. CROWE'S GARDEN show flyer, setlist and tour laminate; a four-inch CROWES patch; and a 20-page book with liner notes by David Fricke.

"Shake Your Money Maker" was released originally in 1990 when rock was dominated by cheesy pop and hair metal. THE BLACK CROWES gave the genre a much-needed swift kick in the ass with their debut album. That album, fueled by singles "Jealous Again", "Twice As Hard", "She Talks To Angels" and a rollicking cover of fellow Georgian Otis Redding's "Hard To Handle", the band immediately took the music world by storm, selling over five million records and topping Rolling Stone's "Best New American Band Readers Poll" in late 1990.