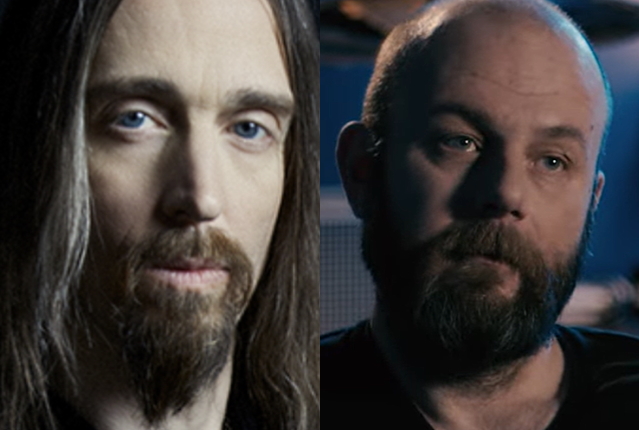 MEGADETH drummer Dirk Verbeuren has paid tribute to his former bandmate in SOILWORK, guitarist David Andersson, who died earlier this week at the age of 47.

Verbeuren, who had been playing with SOILWORK for more than a decade before joining MEGADETH in 2016 as the replacement for Chris Adler (ex-LAMB OF GOD),took to his Instagram earlier today (Thursday, September 15) to write: "Dr. David knew how to have a good laugh. Whether he was being goofy or making ingenious observations or imitating a band we were on tour with in his own brilliant way, he cracked us up all the time. His mood was usually light-hearted bordering on nonchalant. He seemingly walked through life without a care, never taking anything too seriously- perhaps sometimes to his own detriment.

"If you've listened to recent @soilwork or @nightflightorchestra, you know David was a master of inventive riffs and melodies. Songs like Long Live The Misanthrope and Tongue are brilliantly composed, reflecting his prosaic nature. Funny to think David would often write tunes while lounging in his bathtub- but not surprising if you knew the man's penchant for rolling around naked in the dressing room.

"Underneath all the silliness was a darkness which sadly took over David's life in recent years. 47 is way too young and I'm gutted to see another former bandmate depart so soon. My heart breaks for his ex-wife and kids, and for his family, friends and bandmates.

"Rest easy, Doctor, and thank you for all the good times."

In a statement announcing David's passing, SOILWORK called the musician "one of a kind and a brilliant man in so many ways. He was our guitarist for more than 10 years and had a big impact on SOILWORK's musical journey forward." The band went on to blame his death on "alcohol and mental illness".

In addition to being a longtime member of SOILWORK, David played in THE NIGHT FLIGHT ORCHESTRA alongside SOILWORK singer Björn Strid.

Andersson officially joined SOILWORK in 2012 as the replacement for Peter Wichers. Prior to becoming a member of SOILWORK, Andersson had toured on and off with the band since 2006.

SOILWORK was formed in Helsingborg in 1995. Following two highly acclaimed albums, "Steel Bath Suicide" (1998) and "The Chainheart Machine" (1999) on Listenable Records, SOILWORK joined the Nuclear Blast roster in 2001. The band's unique blend of melodic metal developed at a staggering rate as they released a new bombshell each year, touring aggressively throughout North America, Europe, Australia, and Japan. Some of the highlights included Ozzfest alongside headliners BLACK SABBATH and IRON MAIDEN and an arena tour with LAMB OF GOD and KILLSWITCH ENGAGE.