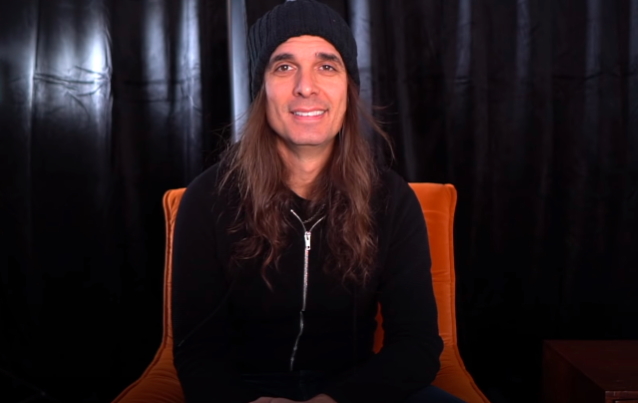 "I like METALLICA — of course," he continued. "I saw METALLICA for the first time live in '89 in São Paulo, Brazil. And back then I was pretty young — I was 17. It was so hard to have any concerts in Brazil back then in '89, so it was cool to see the '…And Justice for All' concert. It was pretty cool. Then I think I've seen them some other times, and I had the chance to play festivals with them.

The original version of "The Mechanix" appeared on METALLICA's 1982 demo "No Life 'Til Leather" and was later reworked for the band's 1983 debut album, "Kill 'Em All", under the title "The Four Horsemen".

MEGADETH leader Dave Mustaine, who was one of the early members of METALLICA, was fired from the band by drummer Lars Ulrich in 1983. He was replaced by Kirk Hammett and went on to form MEGADETH and achieve worldwide success on his own.

When asked what he remembers about writing music with METALLICA while he was in the group, Mustaine told Revolver magazine in a 2011 interview: "I had always called us, as a group, the 'Four Horsemen.' Before I was in METALLICA, I really loved this band called MONTROSE, and their guitarist was Ronnie Montrose. He went on to form a band called GAMMA. One of their records [1980's 'Gamma 2'] had a shark fin cutting through the grass, which I thought was so awesome. Anyway, he had a song on there called 'Four Horsemen' that I did with my band PANIC, which I was with before METALLICA. So when I joined METALLICA, I had the song 'Mechanix', which I wrote, and 'Four Horsemen' was a suggestion of mine to do 'cause we were doing cover songs. So that had planted the seed with James [Hetfield, METALLICA frontman]. And one day when we were coming to rehearsal, Lars had just said something about slowing down my song, 'Mechanix'. I had just gotten to the studio with Cliff [Burton, METALLICA bassist], and we had been listening to LYNYRD SKYNYRD, and I was being a jerk, so I played 'Sweet Home Alabama' instead of 'Mechanix', and thats basically the middle part of what would become METALLICAs 'The Four Horsemen'."

Kiko joined MEGADETH in 2015 and made his recording debut with the band on 2016's "Dystopia" album. The "Dystopia" title track was honored in the "Best Metal Performance" category at the 2017 Grammy Awards.