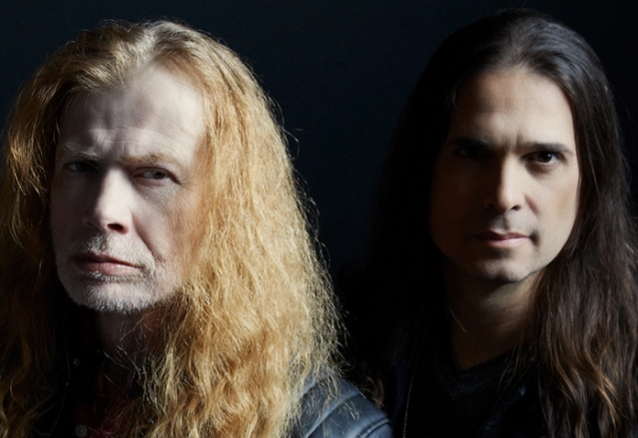 In a new interview with Anne Erickson of Audio Ink Radio, Brazilian-born guitarist Kiko Loureiro, who joined MEGADETH in 2015, spoke about his relationship with the band's leader and founder, Dave Mustaine. Kiko said: "I think there's an understanding. The way I see it is I always try to work for the best of the band, because Dave is MEGADETH. Dave, that's his thing, his passion. Everything he did in his career, his life was always all about MEGADETH. So, for me, that I'm here for seven years, if I dedicate myself to do the best for MEGADETH, then I know I get the respect from Dave, and then we can get along really well, because I'm also caring about his baby. So I'm doing my best to have a great result with MEGADETH on stage, on the albums, promoting the band, so with that, you create a great environment of great communication, a healthy environment, a safe place to discuss ideas. Because in the end, we're discussing ideas. Even if I disagree with Dave, I feel comfortable to come to him and disagree with him, because you don't see people doing this much; people sometimes are afraid of him. But actually I feel that he likes that, that you come with a thoughtful disagreement to the benefit of the band. So I don't have any problems with him; I just have a great relationship with him."

Asked if he thinks MEGADETH has more albums of music left in it, Kiko said: "Yeah. I think this record [the band's latest album, 'The Sick, The Dying… And The Dead!'] shows that MEGADETH is alive and creative and powerful. That's one of the most common comments that I hear and read, is like, 'Wow. The band is still putting out great music, aggressive, fast, energetic.' We're not only going back and playing the old songs forever. [We're] showing that there's a lot of energy, creative energy. So, I believe that we can keep doing this for a long time. Some other bands, they don't do that — they just keep playing old songs forever. So, I think this album is here to prove that, and then the response, with the sales and numbers and social media, shows that people get excited to see good new material from legendary bands."