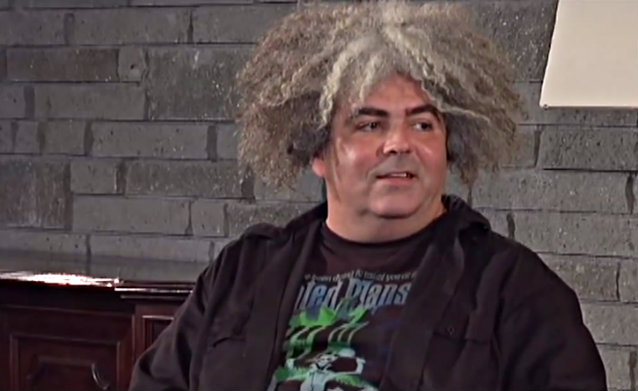 In a brand new interview with A.V. Club, MELVINS' Buzz Osborne was asked to pick songs by "bands that were good, but blew it." Explaining his selection of "Whiplash" by METALLICA, Osborne said: "METALLICA is a good example, because when their first record [1983's 'Kill 'Em All'] came out, I thought, 'Oh, wow! This is a nice breath of fresh air.'

"From the first time I saw the back cover, it was like, 'Those guys are ugly!' These guys aren't winning any beauty contests. Clearasil could use that cover as an ad, and it was great. Here's a band where people are going to remember what the heavy metal music scene was like.

"There were finally bands that were emerging that were against the glossy look. AC/DC was too glossy, even though most people don't understand that.

"The best band along those lines was probably JUDAS PRIEST, even though they were glossier at that point than METALLICA was. Still, there were bands coming out at that time called VENOM and RAVEN that were starting to get a bit more aggressive. Then METALLICA came out, and I thought they were a great marriage of what JUDAS PRIEST was doing and what VENOM was doing. It was teen angst mixed with heavy metal.

"What I've always loved about heavy metal is that it's rebel music. Regardless of whether you like these guys, they're pissed off. That was a total plus to me.

"The song I would pick off that record is 'Whiplash'. You can listen to that and imagine that there hadn't been anything like that at the time. Now, I would like to take the band on that back cover of the 'Kill 'Em All' album — I would like to take those guys and put them in a time machine and run them forward and make them sit through 'Some Kind Of Monster' and say, 'Guys! Do not let this happen!' You know what I mean? How could they not be appalled? They go from a song called 'Whiplash' to a psychiatrist in the studio for $10,000 a week.

"Metal up your ass, indeed."