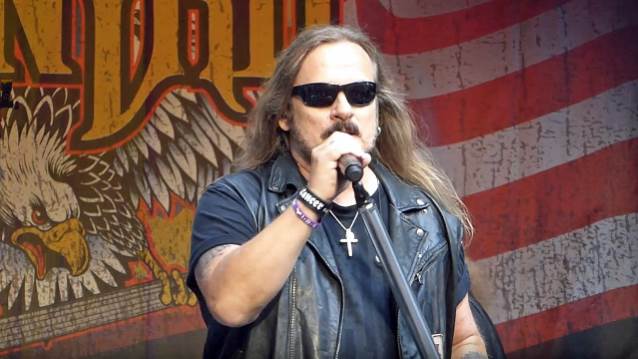 On August 14, New York City's Triad Theater hosts television's critically acclaimed conversation series "Speakeasy". This episode features southern rock icons Gary Rossington, Johnny Van Zant and Rickey Medlocke of LYNYRD SKYNYRD as they sit down with former MTV and VH1 fixture Matt Pinfield. Doors will open to the public at 1:00 p.m. and the conversation will begin promptly at 2:00 p.m. Tickets are available today at 1:00 pm EST at this location.

From unfathomable success to a plane crash that nearly derailed the group's career, founding member Gary Rossington, Johnny Van Zant and Rickey Medlocke will be on hand to share in dialogue that will cover their 40-plus years as one of the perennial rock bands of all time in support of their new documentary, "If I Leave Here Tomorrow", that premieres on Showtime on August 18 at 9 p.m. ET/PT.

Rock And Roll Hall Of Fame 2006 inductees, SKYNYRD recently embarked on the band's "Last Of The Street Survivors Farewell Tour", marking a big moment for generations of fans. After a career spanning more than 40 years and including a catalog of more than 60 albums with more than 30 million units sold, the band, that USA Today called the "whiskey-soaked genre's most popular and influential crew," is ready to rock one last time. The farewell tour is currently underway and includes original member Rossington joined by Van Zant, Medlocke, Mark "Sparky" Matejka, Michael Cartellone, Keith Christopher, Peter Keys, Dale Krantz Rossington, Carol Chase and special guest Jim Horn across the country over the next two years.

Leading the conversation is Rock And Roll Hall Of Fame honoree Matt Pinfield who has had quite the trajectory since his time as music director of the Rutgers University official radio station. Known for championing the global alternative music scene in the late '80s/early '90s, Pinfield became a familiar face during MTV's initial years, hosting shows like "120 Minutes", "MTV Live", "Say What?" and countless other MTV specials. In addition to his close work with THE ROLLING STONES and Jack White, Matt also served as vice president of A&R at Columbia Records, and was responsible for signing popular rock acts such as COHEED & CAMBRIA and CROSSFADE.

"Speakeasy" is the ground-breaking public television series from the producers of "Front And Center", which pairs Rock And Roll Hall Of Famers, Grammy Award and Tony Award winners, and iconic musicians with an interviewer of their choice. The result is an intimate conversation that leads to stories, experiences and compelling viewpoints that may not have been heard before. "Speakeasy" will return to public television for a fourth season fall 2018.