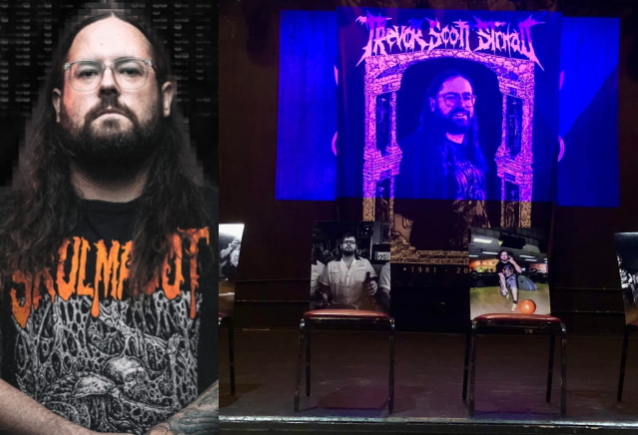 Earlier today (Sunday, July 30),Slagel tweeted out a photo from the memorial and he included the following message: "Yesterday we bid farewell to our brother @TrevorTBDM . Thanks to everyone who came out and made this a special day and night. Special thanks to @ProstheticEJ and @karimnlsl for all they did to set this up #riptrevorstrnad".

Strnad's death was announced by his bandmates on social media on May 11. At the time, they wrote: "It is with deep sadness that we announce the passing of Trevor Scott Strnad. Beloved son, brother, and Shepard of good times, he was loved by all that met him. A walking encyclopedia of all things music. He was a hugger, a writer, and truly one of the world’s greatest entertainers. His lyrics provided the world with stories and spells and horror and whimsy. It was his life to be your show." The band also shared the telephone number for the National Suicide Prevention Lifeline.

THE BLACK DAHLIA MURDER guitarist Brandon Ellis wrote in a separate post: "I can not even begin to process this... In total shock and disbelief. It has been my greatest honor to spend the last six and a half years in a band with this absolute icon and legend. A brother. A best friend. One of the funniest and most entertaining people to walk the earth. The life of the party that is THE BLACK DAHLIA MURDER, as well as any given room he happens to occupy. A lyrical mastermind. A champion of the entire culture of heavy music. Also my biggest supporter. This man changed my life and believed in me more than I do myself. I can not believe there will no more laughs had, songs written together, or stages decimated with Trevor at the helm. I hope he knew how much he was loved the world over."

In an April 2021 interview with Metal Injection, Strnad spoke about his battle with depression and alcohol dependence. At the time, he said: "At the rate I drink while we're gone on tour, it's just not sustainable for getting older. Being 40-plus and being able to do what I do well and not look like a shithead, I've gotta be better to myself. So that's really the impetus [for quitting drinking]. That's the heart of it. It's not that… I know I'm no fun [when I'm drinking].

Formed in 2000, THE BLACK DAHLIA MURDER — named after the infamous 1947 unsolved murder of actress Elizabeth Smart — had a number of shows scheduled for later this year, including an appearance at Daytona Beach, Florida's Welcome To Rockville festival.

Yesterday we bid farewell to our brother @TrevorTBDM. Thanks to everyone who came out and made this a special day and night. Special thanks to @ProstheticEJ and @karimnlsl for all they did to set this up #riptrevorstrnadpic.twitter.com/WEn0aQxUup

Today I paid my respects to one of the greatest, ever—TREVOR SCOTT STRNAD.
So many people love you and miss you, Trevor. I’m forever grateful I knew you.
Thanks for all of the love & friendship.
.#TrevorStrnad@TrevorTBDM@bdmmetal#TheBlackDahliaMurder#Legendpic.twitter.com/6E8tmprSFU