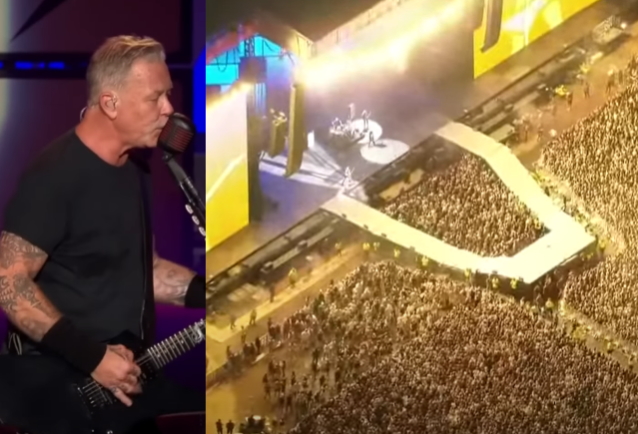 Chicago's FOX 32 has shared helicopter video of METALLICA's performance this past Thursday (July 28) on the city's T-Mobile mainstage at this year's Lollapalooza festival.

METALLICA closed its two hour-plus show 20 minutes past the normal 10 p.m. curfew with a rendition of "Master Of Puppets", the title track of its third album, which recently saw new life 36 years after its release following its inclusion in season four of Netflix's hit series "Stranger Things". The popularity of the 1986 song brought it to the Billboard Hot 100 chart for the first time ever in the band's lengthy career.

During METALLICA's performance of "Master Of Puppets" at Lollapalooza, they projected the now-famous scene from the "Stranger Things" season four finale in which Eddie (Joseph Quinn) shreds their classic 1986 track in the Upside Down in order to attract Vecna's legion of minions.

METALLICA has since weighed in on the inclusion of its music in the Netflix show, praising "Stranger Things" creators the Duffer brothers' "next-level" use of their tune. They added that they "were beyond psyched for them to not only include 'Master Of Puppets' in the show but to have such a pivotal scene built around it."

The band previously headlined Lollapalooza in 1996 back when it was still an annual tour. Nearly two decades later, the group returned as a 2015 headliner.

According to the Chicago Sun-Times, before Thursday, the last time a rock or metal band graced the T-Mobile Stage at Lollapalooza was the 2021 closing set by the FOO FIGHTERS, their last appearance in Chicago before the untimely passing of drummer Taylor Hawkins earlier this year.