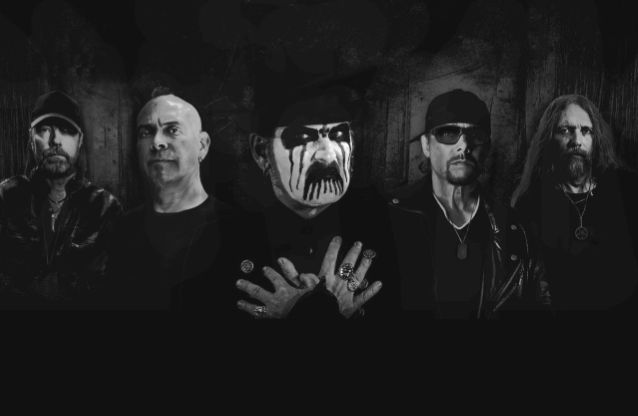 Influential Danish metallers MERCYFUL FATE will embark on a European tour this spring and summer. The trek will kick off on June 2 in Hannover, Germany and will include shows in Poland, Sweden, Germany, Belgium, Denmark, Italy, France, Spain, Finland, Bulgaria, Romania, Hungary, Slovenia, Norway, Czech Republic and the United Kingdom. A one-off appearance at the Psycho Las Vegas festival in Las Vegas, Nevada will follow in late August.

In 2019, it was announced ARMORED SAINT bassist Joey Vera would be replacing original MERCYFUL FATE bassist Timi Hansen for the latter band's summer 2020 European festival appearances due to Hansen's cancer diagnosis. Hansen passed away in November 2019 and MERCYFUL FATE's 2020 summer festival appearances were initially rescheduled for 2021 before being moved back to 2022.

Back in October 2020, Vera told Dead Rhetoric about how he landed the MERCYFUL FATE gig: "I've been friends with [MERCYFUL FATE vocalist] King [Diamond] for some time. ARMORED SAINT did a tour with King back in 1988-89; we have been friends and labelmates forever. And so, he came to see me when I was on tour with FATES WARNING supporting QUEENSRŸCHE in Dallas where he lives. He came to see the show. [Metal Blade Records owner] Brian Slagel was in town. King pulled me aside backstage and told me the story of Timi going through chemotherapy and had a summer tour booked and wasn't sure he was going to be well enough to do it. If he wasn't, would I consider stepping in and helping out. Of course, I was flabbergasted and honored, yeah. I didn't have anything else going on — it was supposed to happen this summer. To honor Timi and help them out, thank you for asking me. In the back of my mind, I was thinking Timi would pull through, he would get enough energy to make it. I was sadly mistaken and it was devastating."

Two years ago, MERCYFUL FATE guitarist Hank Shermann confirmed that he was working on the first new music from the band in more than two decades. At the time, he said about the writing process: "First of all, King [Diamond, vocals] is living in Texas, in the States. I'm living here north of Copenhagen, in Denmark. The drummer [Bjarne T. Holm] is also here, so I work with him in the rehearsal room shaping the new songs. The other guitar player [Mike Wead] is in Stockholm, Sweden, and our new bass player [Joey Vera] is in Los Angeles. So everything is [being done via] Dropbox or e-mails."

The Sabbath comes to you across EU, UK, and US. Be ready and wait for the sound of the demon bell..

For tickets and information visit: mercyfulfatecoven.com