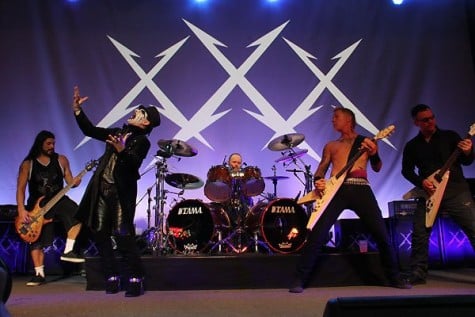 MERCYFUL FATE members King Diamond (vocals),Hank Shermann (guitar),Timi Hansen (bass) and Michael Denner (guitar) were among the musicians who joined METALLICA on stage on December 7 for the second of four intimate shows at the Fillmore in San Francisco as part of the week-long celebration of METALLICA's 30th anniversary as a band for fan club members only.

"I have received a couple of mails asking me to post a few notes about the 'METALLICA event'... so here a short rundown of what was going on.

"It actually started a while ago, when [METALLICA drummer] Lars Ulrich approached the original MERCYFUL FATE members to find out if able and willing to participate. It was all to be secret to keep in line with the surprise effect. When that was sorted, we went to San Francisco; Timi, Michael, Hank and myself from Denmark, and King, obviously, from [his home base of] Dallas [Texas].

"It would be King's first appearance since he joined METALLICA on stage in Dallas, and his first since the bypass.

"We were all anxious and excited about the event, and met up at the San Francisco hotel booked for us.

"[It was] really nice to see the guys together again; a first time in 18 years.

"The following morning (December 7th),we were taken to soundcheck, which was also kept under tight secrecy... [We] actually, had to enter the Fillmore through the kitchen of a Korean restaurant, and up the fire escape staircase.

"The soundcheck was a blast for me to watch.

"Michael and Hank were given each a METALLICA flying V guitars and a bass was ready for Timi.

"A few moments later, the eight guys on stage went through the medley already agreed on, spending quite some time on getting detail absolutely right. King and James [Hetfield, METALLICA frontman] went over who would sing which part and after some adjustments on the monitors, it ended with a complete run-through of the medley. Altogether it was a very smooth soundcheck, with a really nice and friendly METALLICA crew, whom we all owe a huge 'Thank You!'

"During soundcheck, both Livia [King's wife] and I got some photos of the action, some of which have already been posted online. METALLICA had their own photographers all over the place, so you'd surely seen the action by now.

"The Fillmore was set for a great evening, and we now realized who would be the other surprise guests of the evening. They turned up one by one for their soundcheck, and we spend some time checking out the 'Metallica Museum' with rare and unusual effects on display. We then had an afternoon break and returned in the evening around 9 p.m.

"The place was packed, and upstairs in the VIP area we had a chance to meet up with a lot of old friends in the business, whom we had not seen for years. One very important person in the MERCYFUL FATE history is [former KUSF radio DJ and Metal Mania fanzine editor] Ron Quintana, who was partly responsible for spreading the word of the band, way back in the early '80s.

"Our label boss, [Metal Blade Records head honcho] Brian Slagel, was there, and we simply just ran into people we knew again and again.

"King arrived in full makeup and made his way to a small dressing room, right by the stage, at the time when Lou Reed performed on stage. He might have gotten a small surprise when he got off stage, or maybe someone had warned him.

"When Jason [Newsted, former METALLICA bassist] went on stage, it was time for MERCYFUL FATE to be ready. Only a few seconds after he left stage, we heard Lars starting his story of the 'good old days' back in Copenhagen when recording their first albums. The next 10 minutes are documented on all the video footage much better than I can describe it... and after this, there's really not much to say.

"It was an amazing experience and I believe there are loads of comments and stories about how it was to be in the audience.

"The following morning we checked out and flew back home...

"Oh, yes, we did hang out for a while after the show, and yes, we did go to a place for after-hours drinks... but that's another (private) story."