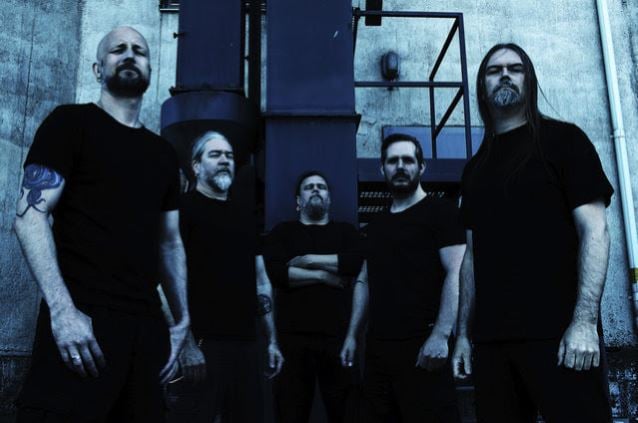 Drummer Tomas Haake of Swedish experimental extreme metallers MESHUGGAH was interviewed on the October 7-9 edition of Full Metal Jackie's nationally syndicated radio show. You can now listen to the chat using the Podbean widget below. A few excerpts follow.

Haake: "Yeah, so it would seem. Yeah, every four years, pretty much, on the dot, I would say, over the last three or four releases. It does take us quite some to write. We're one of those bands, we never wrote a single riff or a part, I think, on a tour bus or in a hotel room. That's just a way of working that just never worked for us. We always have to kind of take time out and have like at least six months, and in a best-case scenario like a year to just focus on writing for us to actually kind of get going on things. So, yeah, that's one of the reasons."

Full Metal Jackie: How do you get into the mindset? Your music is thinking man's metal, right?

Haake: "I don't know, man. That's something that's kind of… I don't think you notice that yourself; you just kind of get into that mode. There's no, like, certain ritual or anything that we go through to kind of put us ourselves there. It's just… Usually, we will all have our ideas already, like things we want to do, like, kind of stacked in our minds, and once you take that time out and you kind of sit down and start really trying to work on things, that's, like, the first pit that you start poking, you know, to kind of get those ideas out there. And that's kind of a starting point for any kind of record-writing process for us."

Haake: "I would say… This is kind of maybe because it's so inherent in the music being technical and, in some ways… Also the lyrics and the vocals of the band also has like its own percussive element, and, is, in a sense, its own instrument in the band more than a vocalist singing on top of something. It's a very integral part of both the structures of the song and even the patterns of parts. So, for that reason… That's one of the reasons why it actually works for me as a drummer to do that. I never thought of it when I was a kid. RUSH [drummer] Neil Peart — he was the first one I kind of noticed that he was writing the lyrics for the songs. That was really weird to me when I was growing up. 'Oh, he writes the songs, he writes the lyrics for the songs. It's kind of odd.' But that was also kind of an eye-opener that it doesn't have to be, you know, the singer that does this, or the drummer that does that. And the same thing goes for other things in our band. I mean, a lot of times the guitarists will write the drum parts for the songs and usually I don't change that. They're very kind of particular about how they want their stuff to be played, and that's kind of what I adhere to, so it kind of goes both ways."

Full Metal Jackie: Tell us, what kind of daily routine do you follow to be at your best to play such complex music every night?

Haake: "Oh, I wish I had a daily routine like that because, actually, for me, whenever we have some time off, that also means I try to have time off from the drums, from music, from the band. Otherwise, the better part of every year, it's so much a focus of everyone in the band, not just to write and record and tour, but there's also the aspect of the company and doing bookkeeping and planning a lot. Nowadays, everything's so mapped out and kind of planned out, and it's all sorts of things you have to consider and think about, like stage art. You know, it's just very many aspects of it that when I do have some time off, I try to just kind of go into the woods and fish, or do something where I can actually kind of disconnect from that."

Full Metal Jackie: You just released a very comprehensive box set. What was the most interesting thing about looking back at your career while putting it together?

Haake: "Well, you tend to kind of forget the fact that by now, when we're talking, this is 27 years into the career of the band, which… that in itself is kind of mindblowing. And with this kind of style of music that we play, and always have played, I don't think we really ever thought that we would be here today and live off of this, which is still, to be honest, kind of a narrow niche of music. One interesting aspect [of putting a box set together] is really realizing how old you got — when you see those pictures [around the time you released] the first album and you look back, 'Holy shit! Look at those kids!' Those were little kids there, all naive and just trying to cram a thousand different riffs into every song. But it's fun to see the evolution of the band, if you listen back to the first release compared to where we are now. Obviously, spanning over 25 years, there's obviously gonna be a difference. But some bands start out playing rock 'n' roll, and they kind of play the same music 25 years later. I think for us, at least for me, the change is very drastic, if you really jump from 25 years ago to now."

Haake: "Not really at all. I mean, it influenced the title. It had no impact on the art for our album. But the Francisco Goya painting, 'The Sleep Of Reason Produces Monsters', was, as you can hear, it's kind of similar to 'The Violent Sleep Of Reason'. So that was just kind of the inspiration to how you would use wording like that. And even though it's not immediately recognized for what we're thinking — what is the violent sleep of reason? — it's still something that was just inspired by that painting in the wording sense. But then when it comes to our artwork and so on, that has nothing to do with the original."

Full Metal Jackie also hosts "Whiplash", which airs every Monday night from 10:00 p.m. to 12:00 a.m. on the Los Angeles radio station 95.5 KLOS. The show can be heard on the KLOS web site at 955klos.com or you can listen in on the KLOS channel on iHeartRadio.