Swedish extreme tech-metal pioneers MESHUGGAH have been forced to postpone their European headline tour due to the ongoing COVID-19 pandemic and the uncertainty that all regions in Europe will be able to restore and provide a safe environment for concerts this fall.

The band states: "The good news is that special guests ZEAL & ARDOR will still be part of the tour and will also be added to the line up for the Royal Albert Hall show in London, and that additional shows in Dublin, Cologne and Nancy have now been added to the routing. Ruhrpott Metal Meeting, being a festival with fixed dates, cannot be rescheduled."

Tickets will remain valid from the 2021 dates.

MESHUGGAH's latest album, "The Violent Sleep Of Reason", came out in 2016 and resulted in a "Best Metal Performance" Grammy nomination for the song "Clockworks". The disc was produced by the band and was engineered by Tue Madsen of Puk Studios in Kaerby, Denmark.

Last October, MESHUGGAH drummer Tomas Haake confirmed to Knotfest.com's "Mosh Talks With Beez" that the band had spent much of the downtime during the COVID-19 pandemic working on material for a new album.

Regarding the musical direction of the new MESHUGGAH material, Tomas said: "Of course, we have a certain framework that we still wanna sound like MESHUGGAH, we wanna have that signature sound, we want people to be able to — even if they haven't heard the song [before] — in the best-case scenario, it's, like, 'Oh, that's gotta be MESHUGGAH,' even if it's a brand new thing. So hopefully that's something we're aiming at. But with that said, as far as the music goes, we try to [do] kind of the opposite of what AC/DC has been doing for 40 years. So we're not trying to write the same album over and over. And whether we succeed with that or not, that's more up to our fans and other people, but that's definitely the aim. We try our best to kind of find new grips within the framework of what we're supposed to be, I guess. 'Cause we don't wanna really step out of that either. We're not looking to be another band all of a sudden or something that we haven't been or that is not true to kind of what we're doing."

Haake said that MESHUGGAH has fared better during the coronavirus-related music shutdown than most other artists.

"We know a lot of bands that just had their album out or just finished something and were just about to go on tour, and this [pandemic] happened," he said. "So, of course, we feel with 'em — that's no fun. We were fortunate enough [in that] we just kind of finished the tour run for [MESHUGGAH's last album] 'The Violent Sleep Of Reason', so we're just writing. We played a lot the last few years, so we had a good amount of cash in the bank to keep us afloat for a while, so we've been really fortunate in all this compared to a lot of bands that are just — they're done. What are they supposed to do?" 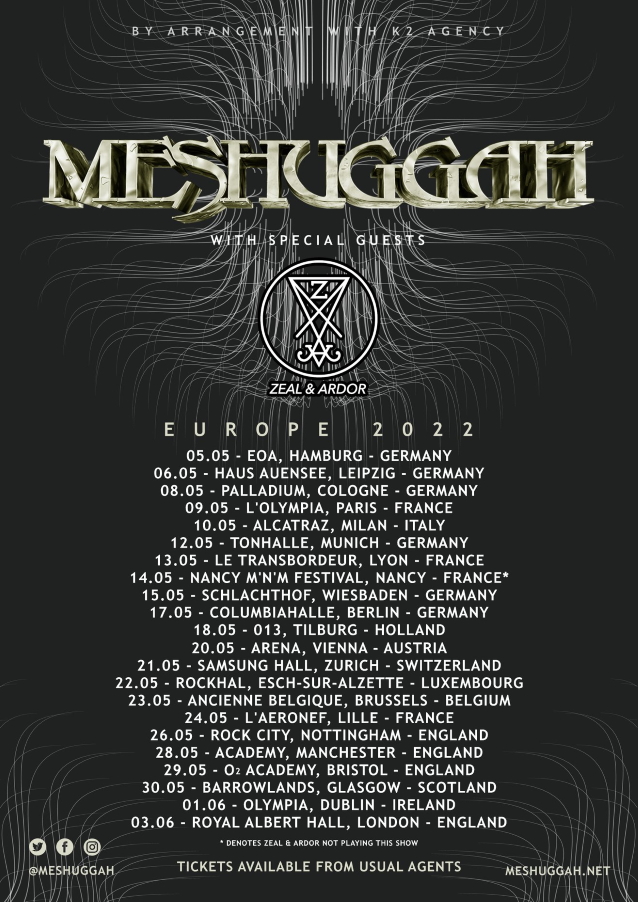