MESHUGGAH To Release 'The Violent Sleep Of Reason' Album In October

Swedish experimental extreme metallers MESHUGGAH have set "The Violent Sleep Of Reason" as the title of their new album, due on October 7 via Nuclear Blast.

The CD's title and artwork were apparently revealed in the new issue of Revolver magazine, which features a full-page ad for the effort.

A photo of the magazine page containing the artwork, as posted on Facebook by a fan, can be seen below.

MESHUGGAH guitarist Mårten Hagström told RockSverige.se last year that he doesn't usually check out any new music for inspiration when composing material for the band. He said: "Since we're in writing mode, I don't listen to music, basically, at all. Not because 'I'm not gonna listen to music,' but it's just that… When you've got a lot of stuff to do… You know, I pick up the kid, go home, feed him, put him to bed, and then it's time for me to work, and I sit and play guitar for… whatever… many hours and try to make some new music, it's not like I'm gonna kick back and put on an album, regardless of style. But I listen to a lot of stuff; we all do. We don't listen to the same stuff, but we spread a lot. So we listen to metal, we listen to… anything, basically."

As previously reported, MESHUGGAH will release the ultimate collectors' piece, the "25 Years Of Musical Deviance" box set, on July 29 via Nuclear Blast. The set is limited to 1,000 units worldwide; only 585 will be available in the U.S. exclusively via the Nuclear Blast webshop.

MESHUGGAH will embark on a North American headlining tour in October. Support on the trek will come from U.S. metallers HIGH ON FIRE.

In 2014, MESHUGGAH was awarded an exclusive scholarship for its services to the Swedish and international music scene. The musicians were presented with the scholarship and diploma by SKAP president Alfons Karabuda at an intimate event in the south side of Stockholm. 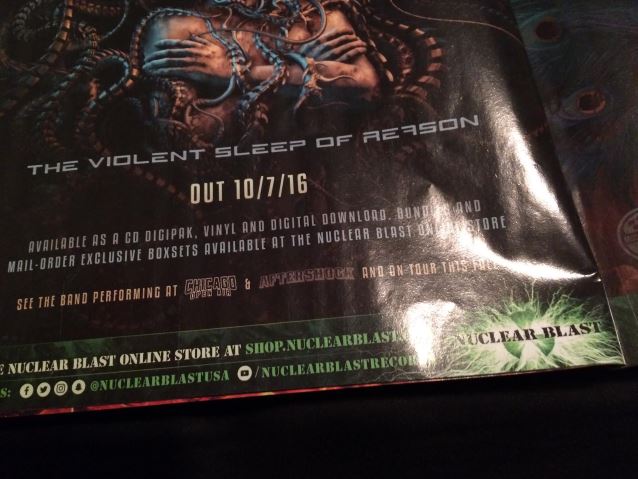 Meshuggah - The Violent Sleep Of Reason - October 7, 2016. Lets do this. - Shout out to John Leonori for the heads up.