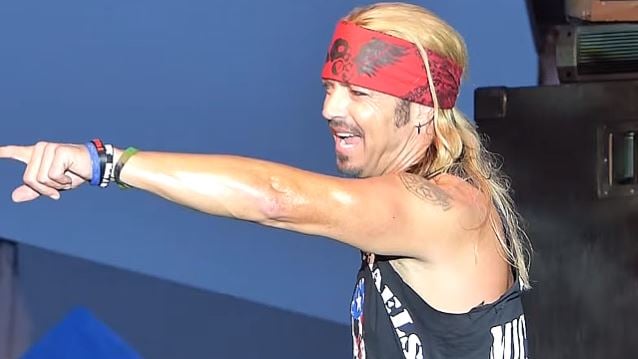 POISON And DEF LEPPARD To Tour Together Again In 2017, Says BRET MICHAELS

POISON will re-team with DEF LEPPARD for a U.S. tour in 2017, it has been revealed.

The two bands first hit the road together back in 2009, and then again three years later.

Asked in a brand new interview with The Salt Lake Tribute about a potential POISON reunion, singer Bret Michaels said: "The honest answer to that is I absolutely hope so, and next year it'll be POISON and DEF LEPPARD. The last time we were out was, I think, 2012, and we'll go out and bring it again, and it'll be insane."

POISON drummer Rikki Rockett, who recently successfully completed oral cancer treatment, has been critical of Michaels's decision to spend so much time nurturing his solo career. He said in a December 2015 interview: "I don't know that Bret wants to do another record with us. I think he'll do shows, I think he'll do maybe a tour."

He added: "POISON is my baby, you know what I mean? Thirty years. I don't wanna kill it off. But at the same time, it will get killed off if we don't do anything. It'll just automatically start to suffocate itself. And so, it's time to do something. This year is definitely decision time."

POISON hasn't done any major touring since taking part in the 2012 "Rock Of Ages" trek with DEF LEPPARD and LITA FORD.

In a 2009 interview, DEF LEPPARD frontman Joe Elliott defended his band's decision to tour with POISON — a group that, just a year earlier, he trashed in the media. Speaking to Noisecreep, Elliott explained, "I didn't say that [POISON's] music had no substance, I said that ours had more. That's a totally different thing. Yes, it was taken out of proportion. Truth be known, it was a dumb question from a foreign journalist in a press conference where I could barely hear what was going on and I was getting really agitated with being in the room in the first place, so I couldn't hear the questions. It was a dumb question from a dumb journalist, to a dumb singer about a dumb subject."

He added, "My belief is that we're better than them ... but I would say that if they just said it about any band whether it be THE WHO or [THE ROLLING STONES] or THE BEATLES — not because I'm an arrogant idiot, but because when you're in a band, you are absolutely a hundred percent allowed to believe that you're the best band in the world.

"So if that question had been asked of Bret Michaels, I would have expected him to have answered it in a very similar way. He's entitled to think that they're a better band than us, because he's in the band, you know what I mean? So that certainly wasn't ... it's not that I thought they had no substance, I just thought that we had more."