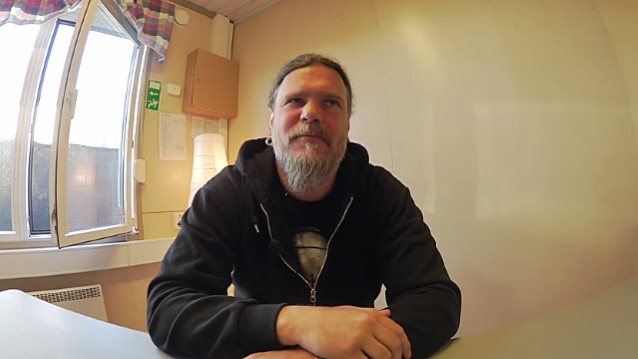 RockSverige.se conducted an interview with guitarist Mårten Hagström of Swedish experimental extreme metallers MESHUGGAH at this year's Sweden Rock Festival, which was held last weekend in Sölvesborg. You can now watch the chat below.

Asked when fans can expect to hear the follow-up to MESHUGGAH's 2012 album "Koloss", Hagström said: "In twenty years. No… I would say sometime next year, but not early. We were supposed to be writing all summer, but stuff happened, and now we're doing this [playing at European festivals]. So, when we finish that off, we're gonna be writing… The last show for this summer is late August in Gothenburg, so when we finish off there, we're gonna go full writing mode again. And then hopefully we'll write through the end of the year and then start recording early-ish next year."

Mårten also revealed that he hasn't been checking out any new music for inspiration. He said: "Since we're in writing mode now, I don't listen to music, basically, at all. Not because 'I'm not gonna listen to music,' but it's just that… When you've got a lot of stuff to do… You know, I pick up the kid, go home, feed him, put him to bed, and then it's time for me to work, and I sit and play guitar for… whatever… many hours and try to make some new music, it's not like I'm gonna kick back and put on an album, regardless of style. But I listen to a lot of stuff; we all do. We don't listen to the same stuff, but we spread a lot. So we listen to metal, we listen to… anything, basically."

In 2014, MESHUGGAH was awarded an exclusive scholarship for its services to the Swedish and international music scene. The musicians were presented with the scholarship and diploma by SKAP president Alfons Karabuda at an intimate event in the south side of Stockholm in December.

"The Ophidian Trek" was MESHUGGAH's second live DVD, the first being 2010's "Alive", which debuted at position No. 8 on the Billboard Music DVD chart.