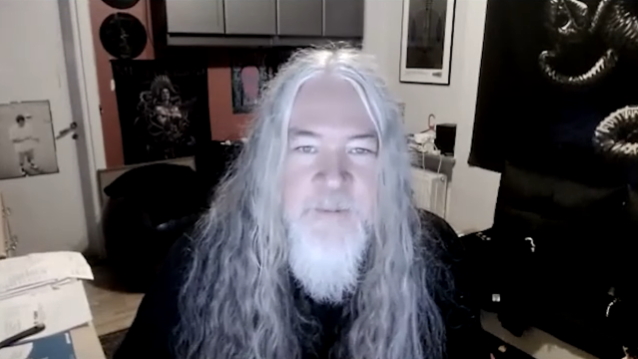 In a new interview with Elliott Fullam of Little Punk People, MESHUGGAH's Tomas Haake was asked if he naturally keeps count of everyday tasks since he's a drummer. He responded: "Not really. I do have one weird thing, though. I don't necessarily see the connection with me being a drummer, but maybe there is. And that's… I really can't walk up staircases without counting the steps. And for a while, actually, I used to count my steps when I was just walking too. But that would be the only thing where I have some kind of weird OCD that kind of kicks in. But you can ask me, all the staircases that I use in life, that I've used more than a couple times, you could ask me, and I would tell you the exact amount of steps for all of them. Anything that's in my neighborhood, I know 'em all."

MESHUGGAH's ninth studio album, "Immutable", will be released on April 1 via Atomic Fire. The follow-up to 2016's "The Violent Sleep Of Reason" was recorded at Sweetspot Studios in Halmstad, Sweden; mixed by Rickard Bengtsson and Staffan Karlsson; and mastered by multiple Grammy Award winner Vlado Meller (METALLICA, RAGE AGAINST THE MACHINE, RED HOT CHILI PEPPERS, SYSTEM OF A DOWN). Visionary artist Luminokaya once again created the cover artwork.

Last December, MESHUGGAH announced that it was postponing its previously announced U.S. tour, originally planned for early 2022, to September/October 2022. At the time, the Swedish extreme tech-metal pioneers said that they needed "to prioritize the physical health of one of the band members who is currently undergoing medical treatment related to a skin condition on his hands, hindering him from rehearsals and from all in all playing his instrument." Haake has since confirmed to Rolling Stone that he is suffering from hand eczema. "I've got to tape up all my fingers and put on gloves just to mess around on the kit, even," he explained. "That means I haven't really touched the drums since we recorded the album, and that was, like, early April. So I'm almost a year out, without even hitting a drum."

According to Haake, he's been suffering from the condition for nearly two years and he has yet to get any clear answers from any of his doctors. "I've been to so many specialists and dermatologists about this at this point and they're all, like, 'Huh?' They say it looks like contact eczema, but we've ruled that out because I've done all the tests that you can do, as far as anything that I might come in contact with. It goes up and down, but it's a bummer, for sure, whether you're a drummer or not. I mean, we all need our hands to function for daily life."

Tomas added that his "hands are bumming me out, man. I try to stay positive about things like this and not allow myself to just get all depressed over it," he said. "It is what it is. We'll see if some new doctor has something important to tell me that helps me clear this up. But, yeah, I mean, if not, I will still have to play."