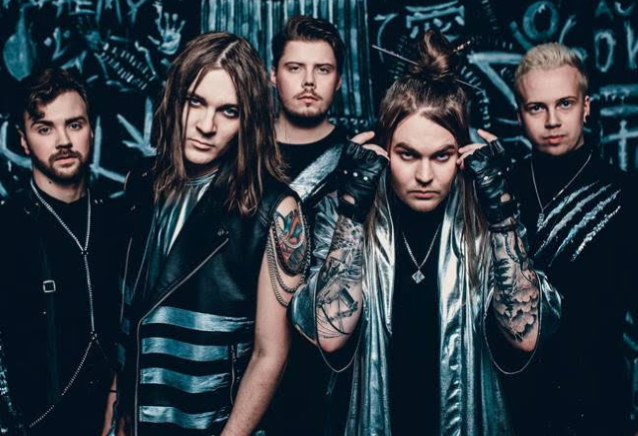 Finnish metal band BLIND CHANNEL has won "Uuden Musiikin Kilpailu", the country's national selection for the Eurovision Song Contest 2021, and will now compete against 40 other acts in the Eurovision finals, due to be held in Rotterdam this May.

Speaking to Eurovision.tv shortly after their victory, BLIND CHANNEL said: "We can't wait to play to hundreds of millions of people, so we can turn them to the dark side too! We're gonna have one night of perfection tonight, because when Monday comes we have to get back to the grind to make sure we deliver the best show in Rotterdam that we can!"

Formed in 2013, BLIND CHANNEL plays heavy rock with fresh pop elements, dual vocals, electrifying energy and a massive crossover potential. The band claims to be inspired by ENTER SHIKARI, 30 SECONDS TO MARS and the early works of LINKIN PARK.

BLIND CHANNEL had its first live appearance in 2013 in its hometown of Oulu. Their career started out with a bang, as they won two big band competitions and impressed audiences all around Europe with their hyperactive live show and scored a recording deal with Ranka Publishing.

Workhorses from the start, the band has already performed on hundreds of club and festival shows all over the globe. They've graced the stages of Wacken Open Air, Sziget and Weekend festival, to list just a few, and garnered new fans on successful tours in Europe with bands like HOLLYWOOD UNDEAD, SIMPLE PLAN, AMARANTHE, SEVENDUST, ALL THAT REMAINS and the band's heroes — ENTER SHIKARI.

BLIND CHANNEL released its debut single, "Save Me" in 2013. In October 2014, a four-track EP, "Foreshadow", followed and the band got already noted by the Finnish nationwide radio station YleX. Preceded by the album's first single "Unforgiving" in June 2015, the band started work on their first album, "Revolutions", in October 2015. The LP dropped in September of 2016 to rave reviews from both audiences and the media.

Preceded by the earworm single "Sharks Love Blood", BLIND CHANNEL's second album, "Blood Brothers" (2018),was produced by the acclaimed Finnish producer Jonas Olsson (AMORPHIS, THE OCEAN). It, too, managed to reap universal praise. The singles "Over My Dead Body", "Timebomb" (feat. Finnish DJ great Alex Mattson) and "Fever" have taken over several prestigious international rock and metal playlists. To cap a monstrously successful album cycle, the band was nominated for the Emma Award (Finnish Grammy equivalent) in the "Rock Album Of The Year" category in 2019.

The band not wanting to mess with a winning formula, BLIND CHANNEL's latest album, "Violent Pop", was produced, again, by Jonas Olsson. Several of the songs were mixed by the man behind the biggest VOLBEAT hits and the AMARANTHE sound, the Danish sound wizard Jacob Hansen. The LP was released in March 2020 via Ranka Kustannus (Finland) and Out Of Line Music (internationally).

The world hasn't seen a metal band win the Eurovision Song Contest since fellow Finns LORDI shocked the audience with their brand of horror metal in 2006, providing the winning song "Hard Rock Hallelujah". In 2008, TERÄSBETONI represented Finland in the Eurivision Song Contest final with the track "Missä Miehet Ratsastaa".