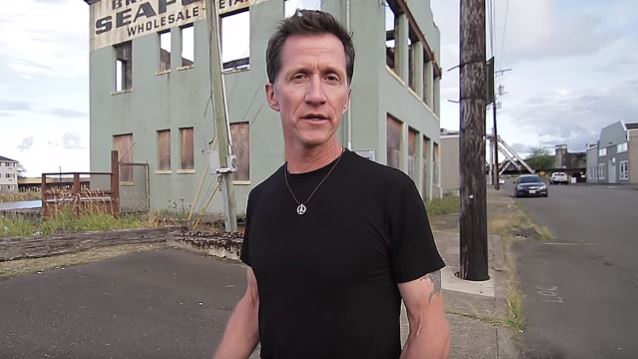 METAL CHURCH's MIKE HOWE: 'I Dropped Off The Radar Because The Record Business Really Disappointed Me'

In a brand new interview with NYS Music, METAL CHURCH singer Mike Howe spoke about his absence from the music scene for two decades before his return to the band in 2015. He said: "I dropped off the radar because the record business really disappointed me. Things were changing, grunge was coming up and we were getting ignored. We were not businessmen, we were musicians, and like a lot of [other] bands, we just wanted to write songs and play metal."

He continued: "You really have to be business-minded or you'll just get tramped on and left behind, I think that was our major problem. One small example: the cover of 'Hanging In The Balance' was just a huge embarrassment to me and I hated it, it was forced on [us] and that was kind of the last straw. So I took a clean break and stepped away in 1994, with a proud feeling of what we had done so far, something I could keep in my back pocket for the rest of my life, and I wanted to step away before it got ugly. So, I got married, had children and lived the American Dream. We were just doing what everybody else was doing. I had my own little business, and had a couple boys. You may have seen I brought my older boy with me on the [Monsters Of Rock] cruise, which was a great time for me, not only playing the cruise, but having my son with me was very important. So, now that they are older, I don't have to dedicate every second of my day in raising them. I have a little bit more free time and then Kurdt [Vanderhoof] called me and proposed coming back."

Howe also talked about the songwriting process for METAL CHURCH's new album, "XI", which came out in March. He said: "It was [the result of] many conversations with Kurdt. We were Dropboxing and sharing music, so I had to really step up my game technologically speaking. I built myself a little soundroom in the garage so I could have a workspace [to create] and send things back to Kurdt."

He continued: "A lot of the conversations were about not getting together for the nostalgia of it, because I'm not a person that looks back, I like to look forward. We are very proud of what we have and the catalog that we have. We really needed to see what kind of songs we could write and what kind of album we could come up with and whether or not my voice was still there. So these were all considerations we had.

"Kurdt was inspired by the possibility of me coming back, so he could write in the vein thinking about Mike Howe's voice and the way we used to write. So, he sent me songs and at the first listen, I was blown away. I was, like, 'Kurdt Vanderhoof is still the master of heavy metal riffs that are original.' It was a great start. We went back and forth, heading in the right direction and after we got a bunch together, we decided it was time to get together in Kurdt's studio in Aberdeen and it was awesome. It was like we never stopped talking to each other; our old friendship was still the same. It was like we were 20 years old again, getting together, having fun and writing music. We [also] talked about the state of the record company and about how we now can have full control of everything we do, the way we write and the way we want to be heard. We have a great record company now, Rat Pak Records; they are in full support of us. We can call Joe [O'Brien], the president, if we have concerns, we can talk directly to him, which in the past we just got lost in big record labels where you couldn't even speak to someone who was in actual control of your career."

Howe added: "So to reiterate, the biggest thing for us was being able to write, record and present an album of material that represented us and who we are today from beginning to end without any external pressures, timelines or anything like that, and that's exactly what we did. We are very happy about this and it's allowed us to relax, be big kids again and enjoy the process."