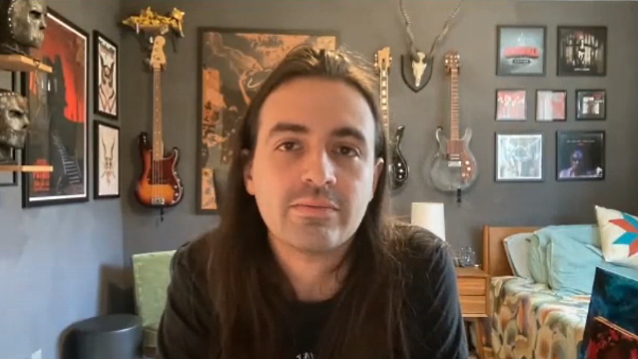 In a new interview with WSOU 89.5 FM, SLIPKNOT drummer Jay Weinberg was asked how it felt for him to have been named No. 1 metal drummer in Modern Drummer magazine's 2022 Readers' Poll. He responded (as transcribed by BLABBERMOUTH.NET): "It's awesome. I'm incredibly grateful for that recognition and that people are in tune with what we're doing, with what I'm doing. It's not the goal of setting out to be in a band and work really hard at making the music that you love, but to have that happen is… It's quite surreal to go from being a Modern Drummer reader all my life to receiving a recognition like that. It's a real honor. It's a real testament to our fanbase and everybody tuning in to what we're about and what I've been up to these last nine years. It's awesome. I'm very thankful. It's not the main idea, not the main goal by any stretch, but [it's] certainly cool."

When it was first announced in September that Weinberg had won Modern Drummer's 2022 Readers' Poll, he released a statement via social media in which he said: "It is truly an honor to be named Metal Drummer of the Year in the 2022 @modern_drummer Reader's Poll. I distinctly remember being a teenager, buying my first copy of Modern Drummer Magazine at my local drum shop. It's surreal and humbling to receive this recognition.

"Thank you so much to Modern Drummer, the entire MD community, and everyone who voted. Your support means the world to me.

"Tomas, Brann, Eloy, and Matt: you guys know how much your music means to me. Thank you all for the endless inspiration you've given the worldwide drumming community, and for everything you do to push the instrument forward.

"Thank you to my wife @chloweinberg, our dog @hiya___papaya, my parents and siblings, and my bandmates in @slipknot for the love and encouragement. I owe you all a debt of gratitude I can never repay.

"To everyone who's been in my corner all these years, thank you so much. I sincerely appreciate it."