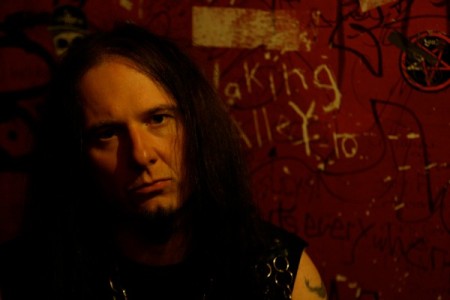 Commented Mike, "I am psyched to be featured on the iTunes podcast from Berklee.

"I attended Berklee College Of Music between 1990 and 1994. It is an awesome surprise to be a part of it, to be honest — especially since I was just a crazy metalhead blowing up the amps while studying there. Most other students were a bit more 'proper' by playing jazz. I certainly was a sight with my old Chastain, Macalpine and OVERKILL T-shirts roaming the halls. I was more interested in learning Steve Vai's 'For The Love Of God' than working with the 'Real Book.' While everyone was practicing their jazz licks, I would sneak out to a local Boston rock club Axis and just immerse myself in the scene of national metal acts touring through. I think fondly of the time I have spent there."

The featured song in the podcast is "The One You Love To Hate" from HALFORD's "Resurrection" album. The track additionally features IRON MAIDEN's Bruce Dickinson.

Said Mike, "I remember recording my parts for that song in California and when both Rob [Halford] and Bruce walked into the studio's control room. Both of them just stood behind me and listened to me working. Talking about nerve-wracking, man. It was just a huge thrill to be involved. That entire album just contains incredible energy."

You can listen to the podcast at this location.