METALLICA has announced the details of the 2018-2019 North American leg of of its "WorldWired" tour in support of the band's latest album, "Hardwired… To Self-Destruct".

The 34-date trek kicks off September 2 in Madison, Wisconsin and runs through March 13 in Grand Rapids, Michigan. Tickets go on sale to the public starting March 2 at Live Nation and the Fan Club presale begins February 27. Each ticket purchase will be accompanied by a physical or digital copy of "Hardwired… To Self-Destruct".

Says the band: "Following last summer's sold-out 25-date stadium run, this year we're bringing the in-the-round production currently being seen in European arenas to the U.S. and Canada kicking off on September 2, 2018, in Madison, WI. Along the way we'll be visiting 34 cities we did not go to last year, including a few we haven't been to in decades, including Grand Forks, ND (nearly 30 years),Sioux Falls, SD, El Paso, TX, Birmingham, AL (nearly 26 years) and State College, PA (20 years). About time, wouldn't you say?!

"The fall/winter tour will mark a few firsts for us as each show will get rolling with the Light It Up pre-show party hosted by our very good friend Jim Breuer. Jim, along with a DJ to get the night rocking with some great tunes, hits the stage before us with comedy, fan interaction, giveaways and much more. And if you love to travel and one show just isn't enough, then perhaps the Wherever I May Roam Black Ticket is for you! For the first time in 'TALLICA history, you may purchase one ticket that will allow you floor access to any METALLICA show on the 2018/2019 North American tour. Feel like trucking to Tulsa? Booking to Boise? Motoring to Minneapolis? No problem... you pick the show, call us no less than 48 hours before the gig and you're in! A limited number of 250 of these Black Tickets* will be available for $598 (yes… we are celebrating the re-issue of the 'Garage Days Re-Revisited' EP!).

"Of course, some things don't change! As we have been doing for most of the 'WorldWired' shows, every ticket purchased includes your choice of a standard physical or standard digital copy of 'Hardwired…To Self-Destruct'. Keep it for yourself or gift it to a friend or family member... you'll receive info via e-mail after your ticket purchase on how to obtain your copy. The enhanced experience options designed to take your METALLI-night to the next level are also returning as we continue to partner with the team that makes it all happen at CID Entertainment. You'll have three options of special enhanced experiences, including premium tickets and amenities ranging from early access to the venue and the 'Memory Remains' exhibit of memorabilia to meeting some of us (!).

"Finally, we'll continue to raise funds for our All Within My Hands foundation, which supports a cross-section of national, local and Bay Area charities, music education programs and local food banks. Continuing our collaboration with Crowdrise, we encourage you to make a donation when purchasing tickets to the upcoming shows and each time you donate, you'll be entered to win tickets, pre-show party passes, meet and greet passes, and one lucky winner will be flown to the last show on the tour. For more information, visit crowdrise.com/Metallica2018."

METALLICA frontman James Hetfield revealed in a 2016 interview that the band will cap its live schedule at around 50 shows a year. Hetfield explained: "My body has told me to tell these guys that 50 shows a year is kind of what we can do, so make the best of those. And I think we all kind of agree in that. But 50 shows a year, that's pretty good. My body can handle that. Body, mind and spirit all need to kind of revitalize themselves at home, and days off for voices — things like that — so 50 shows a year, it goes pretty quick, I'm sure."

METALLICA played eight shows in Europe earlier this month and has another 16 dates booked between now and mid-May.

METALLICA guitarist Kirk Hammett candidly admitted in a 2012 interview with Rolling Stone that the band has to tour pretty continuously in order to pay for its huge overhead, which includes the group's own studio, salaries for the staff and crew, and the live show production.

METALLICA was one of six artists — and one of only two rock acts, the other being TRANS-SIBERIAN ORCHESTRA — to sell more than one million concert tickets in North America in 2017, a feat they accomplished in just 26 performances.

The "WorldWired" trek was the fifth-highest grossing tour of 2017, with 1.5 million tickets sold and $153 million earned. The band was also the top-selling rock act of the year and had the third best-selling rock album. 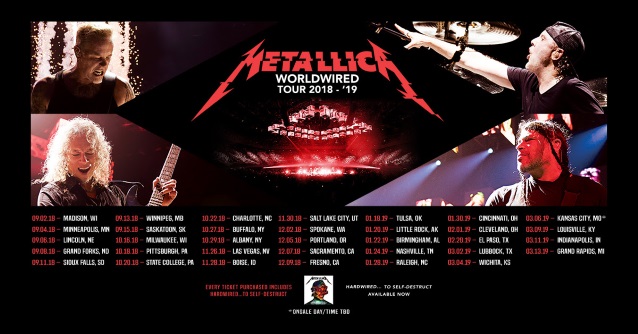