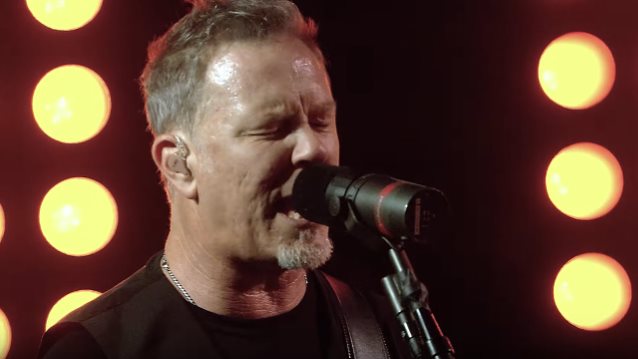 As previously reported, Hetfield told Revolver magazine in a new interview that METALLICA wanted its new album, "Hardwired... To Self-Destruct", to be more "palatable to the ear." Hetfield explained: "I wanted the new one to have a little more layers than [2008's] 'Death Magnetic', but I also wanted it to be more simple — and I wanted it to be more palatable to the ear. I think 'Death Magnetic' is very, very powerful, and I love it, but it abuses the ear quite a bit. This record sounds loud and powerful, but in a warmer way."

"Death Magnetic" was produced by Rick Rubin and many fans complained that the album's volume levels were too loud, resulting in an unpleasant listening experience. Drummer Lars Ulrich told The Pulse Of Radio at the time that he didn't understand the fuss. "I listen to this record, and I listen to it every couple of days," he said. "And when I hear it, it puts a smile on my face and it blows me away, and I don't understand what people are talking about. Somebody told me the other day that there were 12,000 people that had signed a petition to remix the record. We've sold two and a half million copies of 'Death Magnetic'. You do the math yourself."

For "Hardwired..." , METALLICA did not work with Rubin again but promoted Rubin's engineer, Greg Fidelman, to the role of producer. He also mixed the sound for the band's 2013 concert movie, "Through The Never". Hetfield said about the collaboration this time: "We really enjoyed his sonics and the approach he had on the movie. The 'Through The Never' stuff sounds really, really warm and powerful, so it's easy to turn up. That's what we were going for this time, and Greg stepped up."

Hetfield also applauded Fidelman for being able to work with him and Ulrich, saying: "I've gotta give him credit, because it's not easy to hang out with us. It can be pretty rough jumping into the mix between Lars and I. He did a good job of being the swing vote, or the referee, or whatever you want to call it."

METALLICA will head out on a major world tour in support of the set later this year, with North American dates rumored to begin in the spring.