METALLICA: Autographed Copy Of 'Black Album' Remastered Deluxe Box Set To Raise Funds For 'All Within My Hands'

Fandiem is a digital fundraising platform that harnesses the power of the fan community to do good in the world. With their donation to a selected nonprofit, fans are entered to win once-in-a-lifetime experiences with their favorite artists, festivals, athletes, and creators. These are the opportunities that were previously available only to a select few but through fandiem are awarded to the everyday fan at the heart of the community.

Says Fandiem: "Where were you when you first heard one of rock's greatest albums of all time? probably headbanging to songs like 'Enter Sandman' and 'Sad But True'. Now you can do it again with an extremely rare METALLICA autographed copy of the limited-edition Black Album remastered deluxe box set. the set is signed by James Hetfield, Lars Ulrich, Kirk Hammett, and Robert Trujillo. This epic collector's item includes previously unreleased content, behind-the-scenes photos in a hardcover book, cool merch, and more! One superfan will get a chance to keep this signed memento forever. We know. It's awesome.

"What's just as awesome? Supporting causes that make lives better around the world. that's why each entry to win is also a donation toward METALLICA's own All Within My Hands foundation. The organization was started by members of the band and is dedicated to creating sustainable communities by supporting workforce education, the fight against hunger, and other critical services.

"Enter here to win a piece of METALLICA history and support lives nationwide. 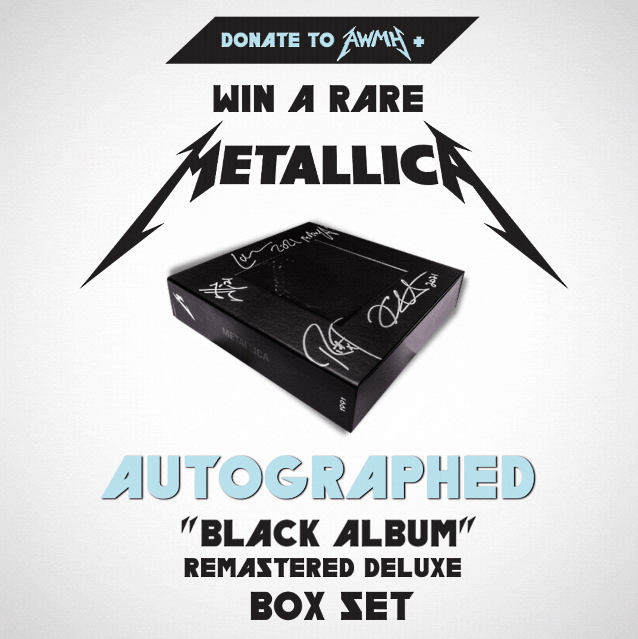