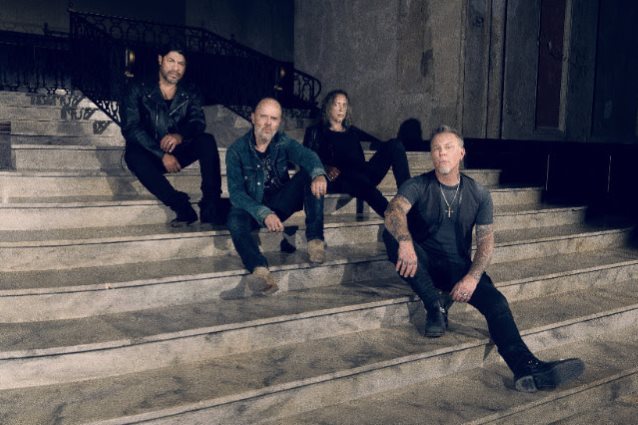 In a brand new interview with All Access, Cliff Burnstein, a co-owner of Q Prime, a talent management company that handles the careers of METALLICA and other major acts, was asked how streaming has impacted the way he works for his artists. "Obviously, we're very statistically minded and we're very competitive," he responded. "In the same way we want to have No. 1 records, get more spins on radio and reach the largest audience possible, we also work to generate as many streams and get on as many playlists as possible. We worked with iTunes during the download sales heyday, and we do the same now with Apple Music and Spotify when it comes to streaming. The medium may have changed, but we take the same approach.

"I'm old enough to have gone through so many formats — vinyl, eight-track, cassettes, CDs, downloads and now streaming," he continued. "And we still do the same thing we've always done: find quality talent, a label to work with them, have them do a lot of touring and encourage them to make the best records they can. We've done all those things for 35 years, and we'll continue to do them no matter what the mode of delivery is.

"In streaming, I believe that hip-hop generally comprises 49 of the 50 most-streamed songs at any time. That may be an exaggeration, but not by much. But we still have eight artists who have around a billion streams or more just on Spotify, which is a pretty good indicator that our bands have big followings who like a lot of their songs. We're happy with that even though we don't have any hip-hop artists.

"Remember, the U.S. represents only a third of our artists' worldwide sales. There are plenty of people in Latin America who stream records, for example, but have never actually bought a record."

Asked if he feels his artists are getting their fair share of streaming revenues, Cliff said: "'Fair,' of course, is not an objective measure. 'Fair' to one guy is 'not fair' to another. I would say that many artists who have signed deals with major labels are not really getting their fair share, because streaming is treated the same as single-track sales under a lot of those contracts.

"You have to start with the whole pie. Take the revenue generated by the streaming company, then a percentage of it is paid out to the labels. That percentage was pretty high, but even though they just cut it by three points or so, it can be an enormous amount of money. I'd say the total amount is fair in that the ratio is comparable to wholesale and retail prices we've had over the years with physical product. Digital downloads also had around the same percentage of revenue going to the labels.

"But the streaming business model is not inherently super-profitable when paying all that out to the labels, because Spotify has yet to make money. So is that fair to the streaming companies? Spotify may say it's unfair, as would Apple Music. From my perspective, if artists are only getting 15% of what comes in from Spotify to the label, that doesn't seem fair to me. I don't know what the exact percentage should be. It depends; some labels have done almost everything for the artist, while they have done hardly anything for others. The thing is, if the music world becomes entirely based on streaming, then the labels would have little if any manufacturing and distribution costs, and getting 85% while the artist gets 15% wouldn't seem fair to me."

Prior to co-founding Q Prime, Burnstein did promotion and then A&R for Mercury Records in the '70s, where he signed artists ranging from RUSH to punk outfit PERE UBU. He first met Q Prime partner Peter Mensch in 1974, when Burnstein was working at Mercury in Chicago and Mensch was working at Leber-Krebs, which managed AEROSMITH. In 1982, the pair decided to join forces and form their own management company, which became Q Prime.

Q Prime has looked after METALLICA since 1984.