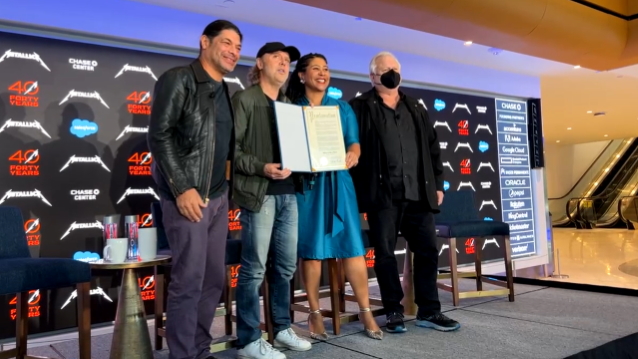 San Francisco mayor London Breed proclaimed Thursday (December 16) as "Metallica Day" in the city, ahead of the band’s citywide "takeover" this weekend for its 40th anniversary.

Earlier today, METALLICA drummer Lars Ulrich and bassist Robert Trujillo appeared with Breed and Another Planet Entertainment president Gregg Perloff for a press event where an official proclamation was made commemorating the first 40 years of the legendary heavy metal band.

Mayor Breed praised the band for its importance to San Francisco and the Bay Area, calling the members of METALLICA "extraordinary musicians and people"

"They're part of the fabric of the community," Breed said. "They have touched people's lives for generations.

To mark its 40th anniversary, METALLICA has put together a series of events throughout San Francisco, culminating with two previously announced concerts at the Chase Center. The celebration will feature performances by TAIPEI HOUSTON, which features Ulrich's sons, and THE WEDDING BAND, a side project of Trujillo and METALLICA guitarist Kirk Hammett.

"Part of this METALLICA experience and takeover includes supporting small businesses and a clean-up at the beach," said Mayor Breed.

Ulrich and Trujillo spoke about the acceptance and sense of home that San Francisco offered to METALLICA after the band first moved to the Bay Area from Los Angeles in 1982.

"We didn't start in San Francisco," Lars said (as transcribed by BLABBERMOUTH.NET). "We started in Southern California. And we came up to San Francisco, the first time, in 1982, in September, and played at the Stone and subsequently played at the Old Waldorf a couple of times… And we had done six, nine months in Los Angeles, and we did not belong.

"The reason we all wanted to be in a band was to fit into something greater than ourselves, and we absolutely did not fit into anything in Los Angeles, Sunset Strip, Hollywood — any of that. We felt like complete outsiders," he explained. "When we came up here in September of 1982 and we started playing, we played four shows that fall — like I said, at the Stone, the Old Waldorf and at the Mabuhay Gardens — and we were embraced and we were taken in and we felt so welcomed and so loved up here. There was a sense of music community for people like ourselves who felt like outsiders, who liked things that were not in the mainstream, and that was has obviously been a significant part of San Francisco's history. So coming up here in 1982, standing on the shoulder of the history of the culture, the Beat poets and the hippie movement and the music and Bill Graham and everything that San Francisco represented, we were just embraced instantly. We felt so welcomed, so loved and we felt finally like we belonged someplace. And it's been 39 years of feeling that sense of belonging, to not just a geographical place — San Francisco, the Bay Area, Northern California, whatever you wanna call it — but it's also a state of mind. You belong to what San Francisco represents.

"We have been so proud to shout from every rooftop all over the world, at every press conference, in every mic that's been shoved in our faces for the better part of 40 years how much San Francisco gave us an identity and gave us, like I said, a sense of belonging," he added. "And we fly the flag proud for San Francisco and the Bay Area all over the world on our t-shirts. But we are so proud of our connection to everything that San Francisco represents and to all the wonderful people, to, obviously, the great physical and geographical elements here and the history and the cable cars and the Giants and the Warriors and the list goes on.

"Those of you who know our story know that we've been fortunate enough to travel all over the world — we've played all seven continents — and there are many, many wonderful places on this planet where music, compared to when we started — Latin America, Southeast Asia, places that you wouldn't expect 30, 40 years ago that you could bring rock and roll to — that have now also embraced us. But our hearts and our souls and our sense of belonging will always be San Francisco. And METALLICA and San Francisco will always be two words which are synonymous with each other."

METALLICA's massive 40th-birthday celebration will include two unique live shows featuring two different setlists December 17 and 19 at Chase Center. Tickets for these shows were made available only to registered members of METALLICA's Fifth Member fan club.

The 40th-anniversary shows see METALLICA return to Chase Center for the first time since the September 2019 "S&M²" concerts that also served as the venue's grand opening.

Formed in 1981 by Ulrich and guitarist/vocalist James Hetfield, METALLICA has become one of the most influential and successful rock bands in history, having sold nearly 120 million albums worldwide and generating more than 2.5 billion streams while playing to millions of fans on literally all seven continents. The band's several multi-platinum albums include "Kill 'Em All", "Ride The Lightning", "Master Of Puppets", "… And Justice For All", "Metallica" (commonly referred to as The Black Album),"Load", "Reload", "St. Anger", "Death Magnetic" and "Hardwired... To Self-Destruct", released in November 2016 and charting at No. 1 in 32 countries.

It’s official, Happy Metallica Day!! It was an honor to ask the first question at the Chase Center press conference...