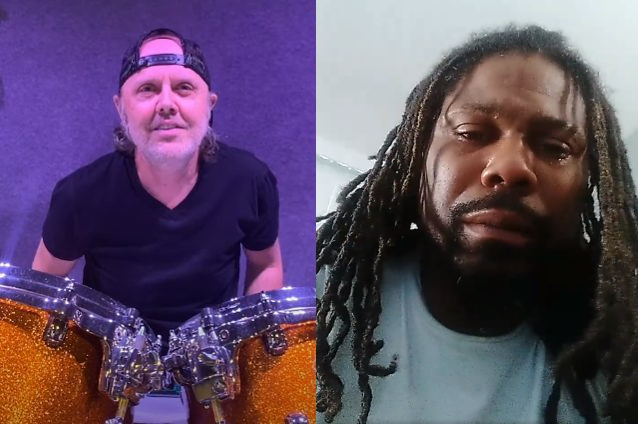 METALLICA Gifts L.A. Street Performer New Set Of Drums After His Were Stolen

METALLICA has stepped in to help a Los Angeles street performer after his drum kit was stolen.

Sheriff Drumman, who is famous for playing drums from the bed of his truck, had both his truck and drums stolen from in front of his Hawthorne apartment in December. Although he eventually he got his truck back, the drums were gone.

According to the Los Angeles Times, Sheriff spent nearly six years custom-building the four-wheeled drum set, hand-crafting the metal that made the setup possible, cutting, shaping and bending each slab before adding the details and the bright "#SheriffDrumman" sign above the vehicle.

After hearing about the theft, METALLICA gifted Drumman a new drum kit in Hollywood Tuesday night.

"Man, thank you guys so much," the artist born Anthony Eugene Sheriff said, according to NBC Los Angeles. "Thank you for taking the time and the resources to support and help what I do. I love you for that."

In response, METALLICA tweeted: "We're honored to be able to help out a fellow artist. Keep the music going, Sheriff Drumman!"

We're honored to be able to help out a fellow artist. Keep the music going, Sheriff Drumman!https://t.co/EwlAhNnFKd