METALLICA Goes Back To Its Early '80s Home, Receives Proclamation From Mayor

On April 16, immediately after their performance at Berkeley, California's legendary record store Rasputin Music in celebration of Record Store Day 2016, the four members of METALLICA and some of their closest friends and colleagues made their way over to 3132 Carlson Boulevard in El Cerrito, California, which was home to METALLICA during its breakthrough years from 1983 to 1986. During this period, the group — which relocated to the Bay Area from Los Angeles to play with bassist Cliff Burton — rehearsed and wrote most of the songs for the albums "Ride The Lightning" and "Master Of Puppets" in the house's garage, which has since been torn down.

"A couple years ago we thought it would be cool to come over and see if we could buy the garage from the people that lived here, and we were going to put it inside [METALLICA's headquarters in San Rafael, California]," said METALLICA drummer Lars Ulrich. "But the garage is long gone. Whoever's got the garage, please return it. Maybe we would finish the new record quicker if we were in that fucking garage."

He continued: "The fact that houses can shrink over time is really crazy. This house is officially 30 percent smaller than it was in the '80s. I don't know if anybody else is thinking that, but that's my first thought.

"Thankfully, most of the things that went on in here are forgotten. But we had a lot of fun."

Added METALLICA frontman James Hetfield: "This is unbelievable, to be back in this place. I think we've all kind of forgotten a lot of stuff that's happened in our history, and this is a great way to jog our memories."

METALLICA guitarist Kirk Hammett recalled some of the band's old friends from '80s who have since passed on. He said: "It's really, really emotional for me. I'm sure it's emotional for you guys, too. I'm just glad we’re here together, you know, 30 years on … to celebrate together, and it's a beautiful thing."

"Murder In The Front Row: Shots From The Bay Area Thrash Metal Epicenter" co-author Brian Lew, who befriended and photographed METALLICA as they started their careers, was one of the lucky attendees at last weekend's special event. He said: "The band found a way to rent the old METALLICA nansion in El Cerrito for the weekend and brought in a production company to recreate the theme of the old metal days when James, Lars, Mark Whitaker [manager of EXODUS and sound engineer of METALLICA] and Clive The Dog called it home. Beyond amazing. Sadly, the garage is long gone and a three-unit apartment/garage sits on the spot behind the house now, but it was one last party at 3132 Carlson, and they amazingly rented out the new three-car garage to serve as the bar for the event. It was special that each of the band guys said something about what the house and those times meant to them. Kirk [Hammett] almost broke down. It was heavy and a celebration at the same time. It was also special that the day was the anniversary of Kirk's first show with the band."

To cap off this special day, Greg Lyman, the mayor of El Cerrito, presented the members of METALLICA with a proclamation commemorating their ties to the city.

Video footage of METALLICA's speeches at the event can be seen below. Photos can be found at GettyImages.com.

Author Joel Mclver's book "To Live Is To Die: The Life And Death Of Metallica's Cliff Burton" describes a regular scene at Carlson Boulevard home while the members of METALLICA lived there: "It was a mess, because James, Lars and Mark Whitaker lived there and they would have these nightly drinking sessions. Everyone and their mother or father who was remotely interested in METALLICA would come over with a case of beer — and, of course, those guys wouldn't turn away any sort of strangers bearing gifts of alcoholic beverages."

METALLICA revisited its El Cerrito roots as part of a special weekend celebrating the reissue of the band's first two albums, 1983's "Kill 'Em All" and 1984's "Ride The Lightning", on April 15. Both records were remastered for the most advanced sound quality and were made available in three formats — CD, vinyl, and deluxe box set. Both deluxe box sets include original source material from the band's personal collection with many never-before- heard-or-seen recordings, along with a book including rare photos and essays from those who were there.

Trip down memory lane in El Cerrito with Tom Hunting of Exodus! #Metallica#exodus by metallica pic.twitter.com/RU2vBkzQHg 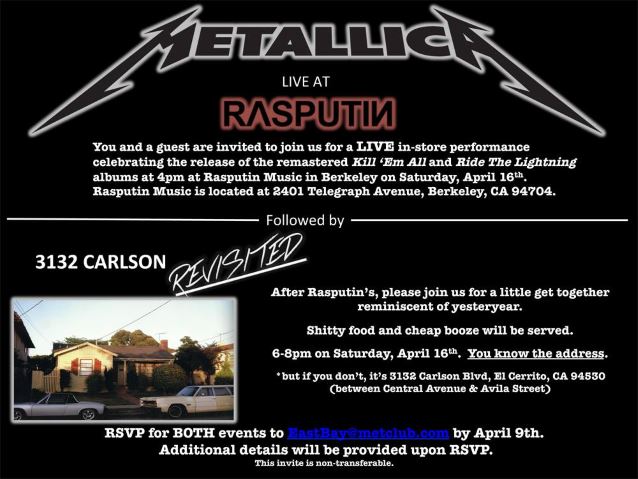