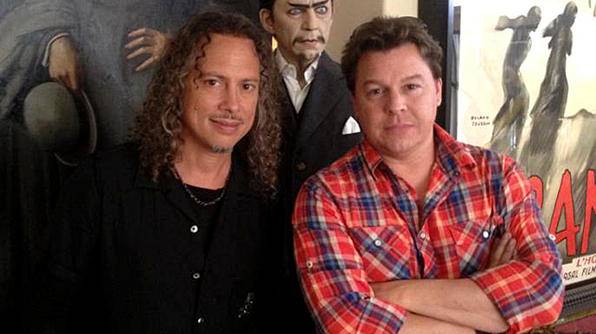 METALLICA guitarist Kirk Hammett will appear on tonight's special one-hour episode of "Toy Hunter". According to The Music Universe, in this Halloween special, "toy and collectibles expert Jordan Hembrough is on the hunt for some of the scariest toys to sell at the Midwest’s HorrorHound convention. Further, Hembrough’s toy buddy Mark needs help with a special client — METALLICA guitarist Kirk Hammett, who’s looking for extremely vintage, scary toys. In between scoring 'Ghostbusters' memorabilia in Connecticut and a 1972 Parker Brothers Ouija board in Salem, Massachusetts, Hembrough scours the country for the perfect monster memorabilia for Hammett. Not only is Hembrough pressured to locate just the right item to ensure Hammett is a happy customer, but he risks losing a potential new rock star client if he fails."

Asked in a 2012 interview when he first started collecting horror artifacts, Hammett replied: "Well, I've been into the horror genre ever since I was five years old. You can say I actually started collecting at six years old. That's when I bought my first monster magazine and started buying monster toys in the late '60s, early '70s. I got a lot of comic books and magazines. That was a constant throughout my childhood. Then, when I was about 13 years old, I got into rock 'n' roll, particularly hard rock. That led me away from horror. Once I started listening to the music, buying albums, and going to record stores by myself, I turned a corner, and I was doing things that were a bit more 'grownup.' For a brief while, I thought all of my comic books and horror books were kids' stuff. I got engulfed in music, bought a guitar, and started playing obsessively. I made a conscious pact to become a musician. That dominated my focus for the next eight or nine years. Once I started making a little bit of money with METALLICA, I thought, 'Wow, I'm still really into horror movies.' Throughout that time, I was watching a lot of horror films. I just wasn't buying comic books, magazines, or toys. I was remotely connected to the genre though. When I started getting a little bit of money, I began buying comic books, horror magazines, and a lot of horror toys from the '60s. I wasn't able to get them before. I was really into the toys from the early part of that decade when I was still an infant. In my early twenties, I realized there was this network of people that was way into this stuff. I fell into this network, and it spanned across the country. One thing led to another and I was collecting everything again. I found myself going full bore once more. I started at six. There was a time rock 'n' roll drew me away from being a monster kid, but I was able to get back into it. I totally delved into it and never stopped."