METALLICA Has Top 5 Best-Selling Vinyl Albums In U.S. This Week

METALLICA has secured the top five positions on Billboard's vinyl sales chart, thanks to six new vinyl reissues of the band's albums at Walmart. This makes METALLICA the first artist to claim all top 5 slots of the vinyl sales chart since the chart's debut in 2011.

The five METALLICA LPs on the chart are as follows:

In 2014, METALLICA remastered and re-released its back catalog on its own Blackened Recordings label.

In a 2018 interview with Classic Rock, drummer Lars Ulrich opened up about why vinyl mattered so much to him. "I still have all of my old records," he said. "I still occasionally take them out. I would be lying to you if I said there was no nostalgic undertone to the whole thing. It’s just nice to be able to sit down and listen to music for no other reason than to sit down and listen to music."

In a 2017 interview with Red Bull, METALLICA frontman James Hetfield also talked about his appreciation for vinyl. "We grew up with and love vinyl," he said. "It's an experience, an event. It's tangible: you hold the record, take it from the sleeve; place the needle in the groove.

"About six months ago, I was in L.A., visiting some old high-school buddies and we just sat around listening to vinyl… stuff like KANSAS," he continued. "Just the act of flicking through the boxes, smelling the cardboard, reading the sleeve notes, and listening to that warm sound — it's very immersive."

Last year, METALLICA introduced its own Vinyl Club. The subscription-based service provides fans with vinyl versions of rare cuts, demos and rough mixes, live rarities and other cool stuff. And none of it had been offered on vinyl before.

"As huge music fans, the band has been super excited to experience the resurgence of vinyl and the enjoyment of collecting, exploring and connecting with other fans mining for lost treasures," the band said in a pres release. "Those who love the look, feel and sonic warmth of vinyl are already in an exclusive club of sorts." 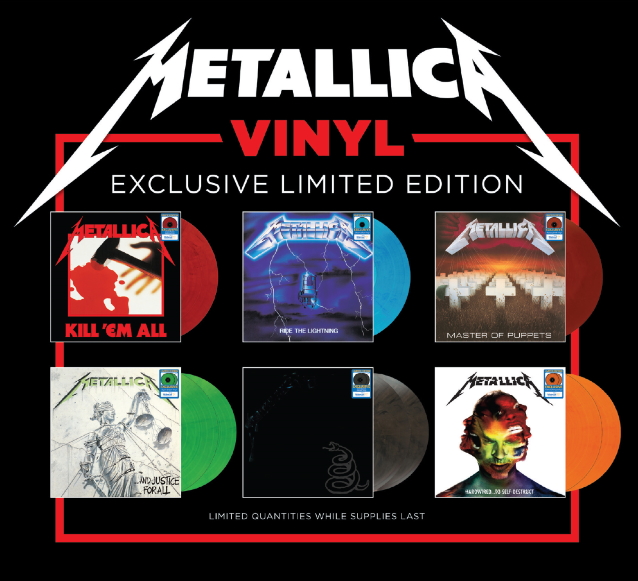