METALLICA is preparing deluxe remastered versions of its "…And Justice For All" (1988) and "Metallica" albums and is reaching out to its hardcore fans for help to get content for the new editions.

Says the band in a social media post: "With the deluxe box sets of 'Kill 'Em All' and 'Ride The Lightning' behind us, and 'Master Of Puppets' less than a month away, it's time to start trudging forward with '…And Justice For All' and 'Metallica'.

"As you may remember, we asked you for help in putting together the first three box sets and, to make sure there's a fan footprint on all of these releases, we'll be doing that again! We're looking for anything and everything you might have from August 1987 through July 1993… photos (taken by you!),flyers, ticket stubs, backstage passes and whatever other mementos you may have from that time. Also, if you happened to interview James [Hetfield], Lars [Ulrich], Kirk [Hammett] or Jason [Newsted] during that time and still have the recording, please let us know!

"Make your mark on these albums by emailing us at [email protected] to share your story and receive more info about submitting these little pieces of history. Nothing is too small or too trivial… share your archives with your fellow fans and have some fun with us walking down memory lane."

"...And Justice For All" was Jason Newsted's first full-length album with METALLICA after he replaced late bassist Cliff Burton in 1986.

The album was the first by the band to sell more than a million copies and featured their first radio hit, "One", which was also the basis of the group's first music video.

The record was nominated for the first-ever Grammy for "Best Hard Rock/Metal Performance", but infamously lost to JETHRO TULL's "Crest Of A Knave". 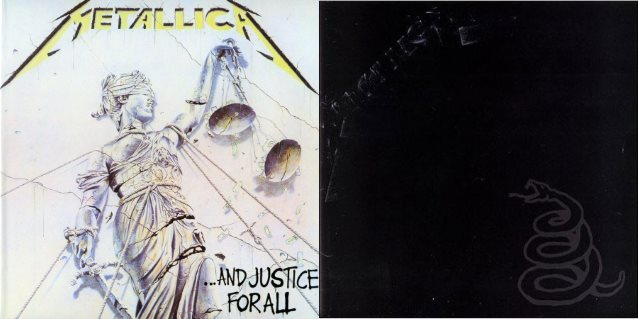