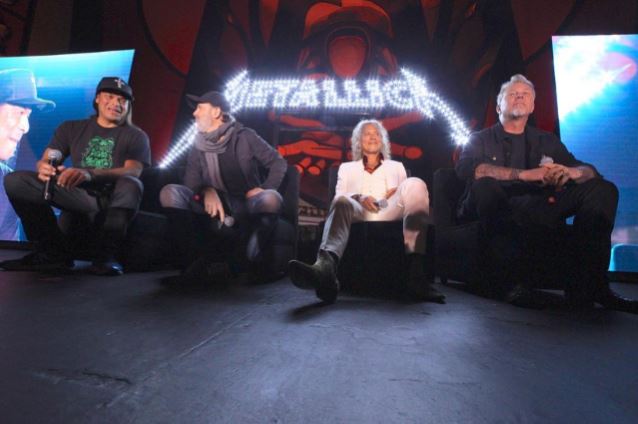 METALLICA's JAMES HETFIELD: 'I Don't Know Why We Waited So Long' To Make A New Album

Around 500 METALLICA fans were lucky enough to attend a special question-and-answer session with the four members of the band on October 29 at Polyforum Siqueiros in Mexico City. You can now watch video footage of the event below. A couple of excerpts follow (transcribed by BLABBERMOUTH.NET).

On what inspired them to make their new album, "Hardwired... To Self-Destruct", due for release on the band's own Blackened Recordings on November 18:

Kirk Hammett (guitar): "Maybe because we were late on making it."

James Hetfield (guitar, vocals): "It's what we do; we make music. It took a long time. People got mad. And I realized when we were playing the album for some of the journalists that it's such a great feeling to give birth to new music and how it makes other people feel made me feel good. So I don't know why we waited so long. Make sure we don't wait so long again, okay?"

Lars Ulrich (drums): "Get tattoos that say, 'Don't wait so long,' and send them to us."

On what albums changed their lives:

Hammett: "You know, for me personally, every time we put out an album, it changes my life, for sure. I mean, whenever we release an album, it always seems to be… we find ourselves in different part of our lives, we find ourselves in a different situation in the course of our career. And when we put out an album, like James was saying, it's such an emotional thing, and to watch the music really affect people in a positive way, I mean, that's just the most amazing thing for me to see."

On the most difficult situations they faced in their lives over the course of the three and a half decades that the band has been together:

Hetfield: "Well, yes, we've grown up together, we've experienced so many life experiences together. Great, great mountains we've climbed, and then deep valleys we've been. You know, the passing of Cliff [Burton, early 1980s METALLICA bassist] was really, really difficult for all of us. And I would say the movie 'Some Kind Of Monster' definitely highlights a real difficult time for the band and for me personally. I think that being honest in our music, being honest about ourselves as artists, and music is such a great therapy. And it means a lot to me that my darkness can connect with your darkness and make it okay."

"Hardwired...To Self-Destruct" was produced by Greg Fidelman with Hetfield and Ulrich. The band recorded the disc at its own studio. 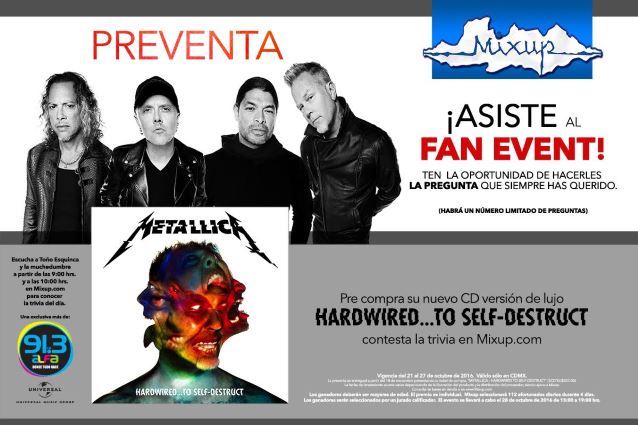