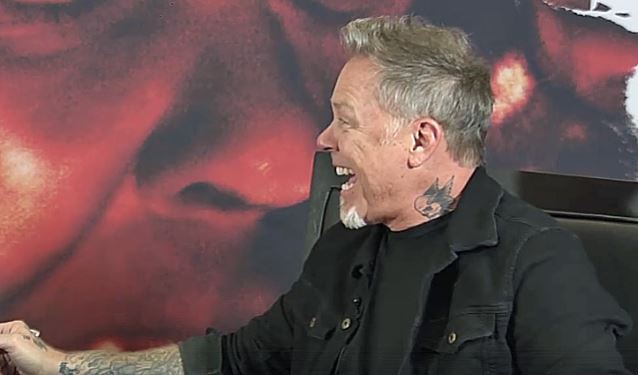 BuzzFeed México has uploaded a video clip of METALLICA frontman James Hetfield's reaction to being shown photos of various celebrities wearing METALLICA t-shirts in public. The stars who are seen decked out in METALLICA garb are Mary-Kate Olsen, Kim Kardashian (whom Hetfield jokingly identifies as "Kanye West in drag"),J Balvin, Taylor Momsen (who looks like "a goth Madonna," according to James),Ryan Gosling, Avril Lavigne and Michael Clifford (5 SECONDS OF SUMMER).

Hetfield last December said that pop superstar Justin Bieber wearing a METALLICA shirt in public was one of James's "Top Ten Things Of 2015."

Bieber was slammed in June 2015 by heavy metal fans for sporting a METALLICA t-shirt.

The 22-year-old singer posted a photo of himself donning a wide-brimmed black hat along with an oversized black METALLICA top. This led to a torrent of abuse being hurled in his direction, with one Instagram user writing: "Take that shirt off you don't deserve it," while another added: "U r a disgrace to metallica." Someone else stated: "I love Metallica and I hate Justin Bieber."

Back in 2013, METALLICA drummer Lars Ulrich defended Bieber after a backstage video surfaced of the singer performing an impromptu cover of METALLICA's "Fade To Black". Ulrich said: "I think the kid's really talented and obviously to go through what he's going through at that early age must be a mindfuck. So the fact that he still goes out there and does it, I admire that and I think he's super talented."