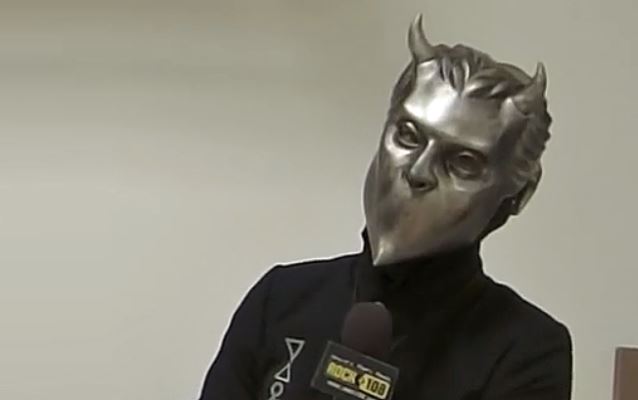 GHOST's Nameless Ghoul Has Had 'A Lifelong Fear Of The Dark'

Ned of the Rock 108 radio station conducted an interview with one of the Nameless Ghouls from Swedish occult rockers GHOST on October 5 in Cedar Rapids, Iowa. You can now watch the chat below.

Speaking about the influence of horror movies on GHOST's stage presentation and overall image, the Nameless Ghoul said: "I think that GHOST, in particular, is very much an outlet for that fascination of… It is a very inspired band and a very inspired project in the sense that it's sort of a mixed in fascination of a lot of different music styles and pop-cultural horror. It's very cinema-driven — I think more so than people understand. It is very, very cinematic."

Asked to name a "go-to" horror movie that he would pick to watch a home, the Nameless Ghoul said: "I am currently in the process of raising children, and we're having a debate at home… Because I grew up watching a lot of films that I shouldn't have way too early, which has led to a lifelong fear of the dark, and I cannot be alone in the house and all kinds of stuff. But on the other hand, it's sort of triggered a lot of imaginary things that, luckily, for the most part, is used in order to create good things. But you have to be a little bit careful. So right now kids are interested in that 'Jaws' film, because I'm, like, 'Yeah, we should see that.' I saw it the first time when I was, like, five, which was way too early, because I was… That scene when you see that corpse coming out of the bottom of the… I had nightmares… I still — not nowadays — but I had nightmares about that way into my teens, so, yeah, you have to pick your ones. And therefore I'm a little bit… Either you go for something really cheesy, where the entertainment factor is high, but it's clearly fake and it's too over the top, so you can shrug it off as just nonsense, whereas if you wanna show a really good movie, like 'Jaws' or 'The Shining', it will be better, but also more terrifying. So, in a way, my favorite films that I want them to see are probably the ones that would cause the most damage."

GHOST's latest EP, "Popestar", was released on September 16 by Loma Vista Recordings and is available online and in record stores on CD, vinyl, and digital. The surprise five-track offering features leading psalm "Square Hammer" and also contains covers of selections by ECHO & THE BUNNYMEN, SIMIAN MOBILE DISCO, EURYTHMICS and IMPERIET. "Popestar" was recorded by Papa Emeritus III and his Nameless Ghouls in Linköping, Sweden and produced by Tom Dalgety (PIXIES, ROYAL BLOOD, OPETH).

The arrival of the "Popestar" EP coincided with the launch of the band's 41-city U.S. headlining "Popestar" tour, which kicked off on September 16.