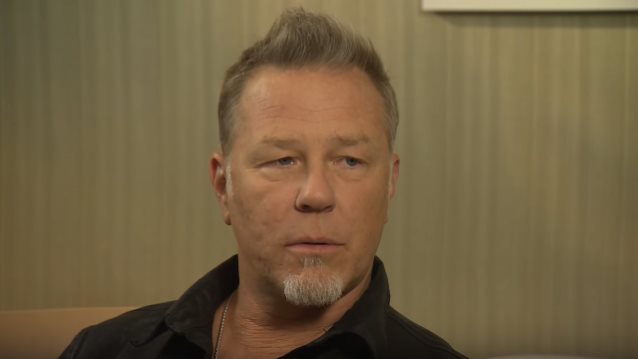 James Hetfield has shot down the perception that METALLICA's "greed" was at the core of the band's decision to launch legal action against Napster in 2000. Although the case was settled out of court, 300,000 users were banned from the pioneering music file-sharing service as a result and METALLICA's image took a tremendous beating in the eyes of music fans.

METALLICA drummer Lars Ulrich, who was the main spokesperson for METALLICA in the Napster battle, has since become friends with Napster co-founder and current Spotify investor Sean Parker and even attended Parker's wedding.

During an appearance on "The Joe Rogan Experience", Hetfield said about Ulrich's role in the Napster case: "That poor guy's still… he's taking bullets, he's taking hits for it still. That poor guy, he got beat up by that, and we all stood behind him. Obviously, he was the spokesman for it. He chose to do that. Management said, 'Hey, this is coming. This is coming. Let's be the ones that stand up for artists.' And he grabbed the flag and said, 'I'm going.' And there were lots of other musicians and people that were onboard as well, but they weren't as vocal or taking the hits like he did. Even like a Dr. Dre, he was onboard with it, but for some reason, in the rap world, it's, like, well, it's all about money anyway. So what?"

He continued: "For heavy metal, there was some kind of stigma around you're an asshole if you're rich, or if you've been successful or something. It's, like, 'We've gotta pull you down into hell with us. Don't be getting good now.' So there was that stigma. But there were other artists that would show up at shows saying, 'Hey, man, I'm really glad you're doing what you're doing.' It's, like, 'C'mon! Join us.' 'Oh no. I can't. My career would be over.' It's, like, 'You fuck!' It's so frustrating. It's, like, 'Dude, do you believe in it?' 'Yeah.' 'Then stand up.' 'Yeah, but no. It'll fall apart. Something will happen. My fans... blah blah blah.' So they were concerned about their own careers and not the big picture of artists, and, obviously, these days you can see. There's no copyright laws, there's no nothing, man. You can rip this and that, whatever, and do whatever you want with it. There's a beauty to that, and a lot of creativity comes out of it, but it gets watered down."

Hetfield went on to say that METALLICA was successful enough to weather the storm but expressed his disappointment that other artists weren't as lucky. "We were at that point where we had such a following, we had such a strength in METALLICA that we survived all of that stuff," he said. "But there was a lot of bands that didn't — they couldn't sustain themselves, couldn't feed their families because of what happened.

"I think the frustrating part was no one really understood that music is our life. If you take that, if you take our… Like, the way we wanna present our music is part of the art. Like releasing an album. Here's how we we'd like to release it. We don't want it leaked over here. We don't want this happening. The presentation is part of the art. Like when you walk into an art studio, the artist has been in there putting it together, like, 'Okay, I want you to see this first, and then that, and then you go here, and you get bam!' There's a passion behind that, and when someone just throws it out there, it kind of loses an impact. But we have survived and we feel good about it and we've adapated, but the record companies certainly did not."

James also talked about the issue of illegal music downloading and how artists are being compensated for their work as digital music sales are continuing to fall and the music business inches closer to an access-over-ownership model.

"I'm all for convenience and the technology moving forward," he said. "Getting music out to people is the important part. But just make sure the artist gets what they deserve from it. 'Cause without that, it's gonna become a hobby. I don't want to see the paramedic show up at my house, and it's like a hobby for him. 'Hey, I'm not really getting paid for what I think I should get paid for my creation, but I guess I'll save your life — maybe.' People didn't relate that to their career or something equivalent."

He continued: "Would you go up to the artist and take that out of his pocket? Would you go into a record store and just lift that — steal it and run out the door with it? Would you do that with...? Okay, there's big corporations that are rich, and would you go walk in and just steal their stuff? There's software companies that are massive. Would you go in there and just rip their stuff? I don't get that mentality. Call me old school, but you need to earn what you get. And if it gets stolen from you, it doesn't make any sense. It's hard to fathom."

Like Lars, James insists that METALLICA's issue with Napster wasn't about the money, but was instead about control of the band's music catalog.

"What it seems like to me, and I could be talking out of my ass, record companies dropped the ball and the new record companies became iTunes; they control it all," he said. "'Here's how much we're charging for your music and here's how much you're gonna get.' Everyone's even. It's like some communist approach. And I don't understand that.

"If we're an artist and we make a lot of money, that's up to us," he continued. "If we give all our money away to charity or we throw it back into a movie that bombs, which happened, that's our choice. We're the fucking artist! We get to do what we want. It's our party. You're invited. And we can destroy this thing if we want. I don't want you to destroy it."

In later years, METALLICA has embraced digital music: in December 2012, the band made all nine of its studio albums, as well as various live material, singles, remixes and collaborations, available on Spotify.