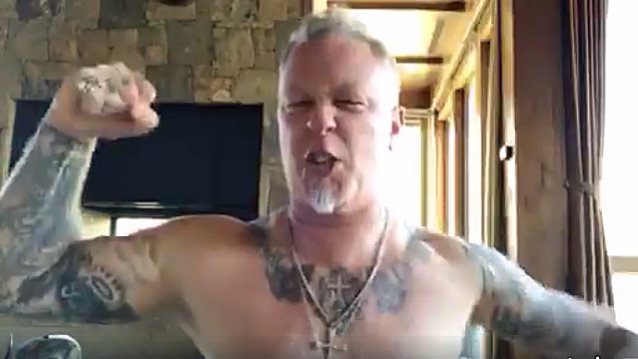 METALLICA frontman James Hetfield has paid tribute to Iggy Pop on his 70th birthday, calling the rock icon "not only a survivor but a huge inspiration."

Hetfield made his comments in a video message that was posted on Iggy's Facebook page. The METALLICA singer said: "Hey, Iggy. Happy 70th birthday. You don't look a day over 30. I've enjoyed immensely getting to know you over this year and have nothing but respect and love for you and what you've done for rebellious music. And I just wanna say that you're not only a survivor but a huge inspiration for me as I battle on into older age and enjoy every moment of it. So I think everyone there, in honor of Iggy and his 70th, should take their shirts off. Yeah! Have the faith! Keep the faith, brother! Take your shirt off."

Pop was the opening act for METALLICA at each of the three shows METALLICA played at the Foro Sol venue, where the two acts were seen by a total of nearly two hundred thousand fans.

METALLICA welcomed Pop on stage for the final encore, with frontman James Hetfield telling the crowd: "METALLICA has much respect for the man coming out here to sing a song with us, and we're grateful that he's been able to be on this Mexico City tour with us. Please show your sign of respect and love to Mr. Iggy Pop."

THE STOOGES singer came onstage for a blistering rendition of the "Fun House" classic, with Pop and Hetfield screaming together on the "Right on!" portion of the bridge before sharing some call-and-response vocals on the third verse.

James Hetfield of Metallica sums it up! You're an inspiration to so many, Iggy!