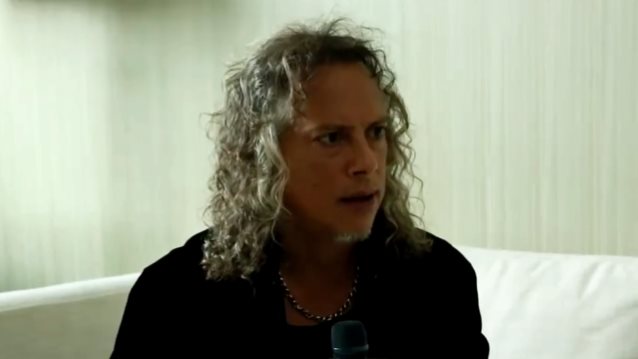 METALLICA's KIRK HAMMETT: 'I'm Still As Pissed Off And Motivated And Angry As I've Ever Been'

Jason Rockman, SLAVES ON DOPE singer and on-air announcer on the Montreal, Quebec, Canada radio station CHOM 97 7, conducted an interview with METALLICA guitarist Kirk Hammett in Toronto, Ontario at the end of November. You can now watch the chat below.

Asked if METALLICA was intentionally looking for a super-aggressive song to release as the first single from the band's new album, "Hardwired… To Self-Destruct", Hammett said: "It was more so that we needed an album opener, and so Lars [Ulrich, drums] and James [Hetfield, guitar/vocals] came up with that song ['Hardwired'], and it just so happened that it would be a great first single too."

He continued: "You know, the interesting thing, to me, about that song is that when we released it, it got picked up by two hundred and fifty radio stations in the States — something crazy like that. And I think about the song, and I think the song is kind of like not that different from a song like 'Whiplash' [off METALLICA's 1983 debut, 'Kill 'Em All']. And when we put 'Kill 'Em All' out, it wasn't like two hundred and fifty radio stations were playing 'Whiplash' and people were going, 'Oh my God! This is the greatest thing!' Blah blah blah. So, yes, times have changed."

Kirk added: "It's a trip to me, because people say, 'Oh, yeah, METALLICA are gonna mellow out with age. I don't know about you, man, but the older I get, the more uneasy I get; it's crazy. I don't see myself mellowing. My brain, my mind, my thoughts, my emotions aren't mellowing at all. If anything, it's getting harder for me to relax. And so this whole 'mellowing with old age,' I haven't seen it yet. If there's any mellowing to be done, it hasn't shown up on my radar, because I'm still as pissed off and motivated and angry as I've ever been. I'm just getting better at processing it."

Hetfield recently said that he had a particular approach in mind when he started putting together ideas for "Hardwired… To Self-Destruct". "'Death Magnetic', I really liked," he told the Argentinian show "La Viola". "It was a little more harsh to the ear. This one sounds a little easier to listen to, but heavy still. I wanted to combine 'Kill 'Em All' and The Black Album, somehow, with some layers, harmonies and simplicity."

Metallica's Kirk Hammett sat down with Jason Rockman in Toronto to talk about Hardwired... to Self-Destruct, band dynamics, vinyl, geek culture's evolution and LOTS in between. #Metallica #MetinToronto #HardwiredToSelfDestruct