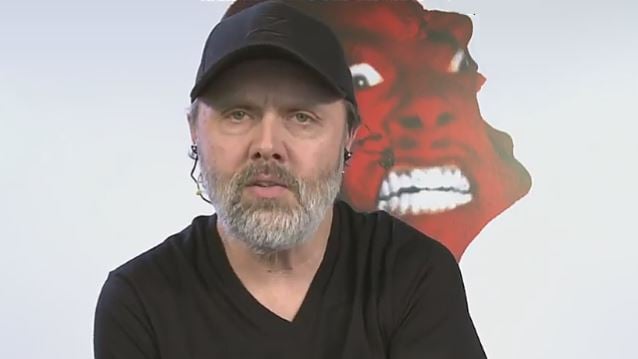 METALLICA's LARS ULRICH: 'Hardwired' Is 'The Most Consistent Record We've Made'

In a new interview with Rolling Stone, METALLICA drummer Lars Ulrich discussed the songwriting process for the band's latest album, "Hardwired ... To Self-Destruct", which came out this past Friday, November 18. He said: "On [2008's] 'Death Magnetic', we spent a long time, a lot of hours and get-togethers, discussing direction. ['Death Magnetic' producer] Rick [Rubin] is very much in favor of meetings and talks. It was really good for us to sit down and do an assessment of who we were, what we thought about ourselves and where we've been and where we wanted to go. We had struggled a lot over the years with trying to find the right balance between the future and the past. There were times where we specifically tuned our backs on the past, out of fear of repetition or retreading ground.

"When we picked up on 'Hardwired' two years ago, there were no talks. I spent the summer wading through this iPod [of riffs] to the best of my ability. Then I sat down with James [Hetfield, guitar/vocals] and said, there were, like, 30 or 40 ideas on this iPod out of 1,500 that I think could be the cornerstones or blueprints of songs. Then we just started going through them. Unlike 'Death Magnetic', we just started jamming and playing. It was almost like we were continuing where we left off with 'Death Magnetic'. What was different, like with 'Spit Out the Bone', is we started trimming it and making it leaner and thinner, more concise. Rick encouraged us to go further and make it longer and crazier and more ridiculous."

Ulrich also called "Hardwired ... To Self-Destruct" possibly "the most consistent record we've made," explaining: "With 'Death Magnetic', we had 14 songs, and we felt there was a clear line in the sand with the first 10 and the last four. So 11, 12, 13, and 14 were not worthy of being in the same company as the first 10, so we held those back and shared them a couple of years later [as the EP 'Beyond Magnetic']. The one thing we felt about this material is that we felt the consistency from beginning to end was unlike any batch of songs we could remember. Even with 'Lords Of Summer' as number 13, at one point we thought about putting it in with the first 12, and then we felt the consistency was so high that we would want to share all of them. I love the consistency about this one. It's very high, at least for us. Obviously nobody's going to sit there and think that song nine on 'Load' is as good as one, two or three or song 10 on the Black Album. I think that this record is deep, and I think there's a consistency that runs deeper than usual for us, so I'm pretty psyched about that."

METALLICA's "Death Magnetic" album sold close to a half million copies in just a three-day sales window and topped The Billboard 200 chart back in September 2008.