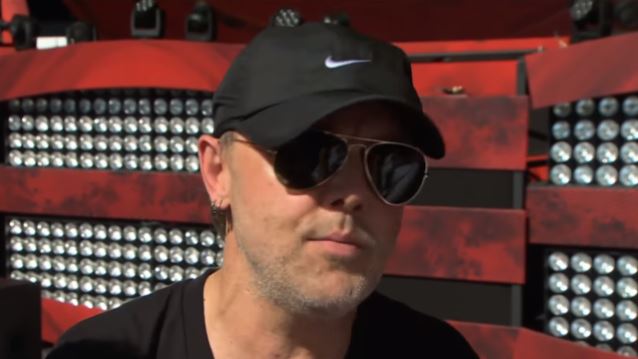 METALLICA's LARS ULRICH On Music Industry: 'You Have To Accept That Nobody Really Knows Where It's Going'

METALLICA drummer Lars Ulrich has once again spoken about how far the digital music industry has come since 2000 when the band launched legal action against Napster, claiming that the pioneering music file-sharing service was illegally allowing users to download METALLICA tracks without paying royalties to the group. Although the case was settled out of court, 300,000 users were banned from Napster as a result and METALLICA's image took a tremendous beating in the eyes of music fans.

Ulrich, who was the main spokesperson for METALLICA in the Napster battle, has since become friends with Napster co-founder and current Spotify investor Sean Parker and even attended Parker's wedding.

Appearing on Chris Hayes's MSNBC show "All In" during last month's Global Citizen festival in New York City, Lars was asked about the Napster case and how many of the things he thought would happen back in 2000 have come true and how many haven't. He responded (see video below): "I think you have to sort of accept that nobody really knows where it's going, so there has to be a lot of impulsive kind of attitudes. It's like a train that's moving, and you don't quite know where it's going, but you sort of try to steer it in the best way you can, realizing that it may go in different places that you had no idea."

He continued: "The music business, or what's left of it, is obviously a very… it's like the Wild West now. Fifteen years ago, when you put out a record, there was a particular way that you did everything. Now it's just whatever works for you. We're in the process of putting a new record out this fall, and we're just doing whatever we feel is right. There's no particular way that it should be."

Lars admitted more than a decade ago that he wished he had dealt with the Napster situation differently. In a 2003 interview with Launch, he said about METALLICA's battle with Napster, "Most of the time, it's like a bad dream, like what the fuck was that? [Several] years later, it's like did that really happen? We went from being somewhat well-respected, well-liked, and then I woke up one day and all of a sudden I was the most hated man in rock 'n' roll. It was like, huh? Me? What did I do wrong? I'm one of the good guys. That was all kind of weird."

He added: "I'm proud of the stance we took. It was a very tough time. It was a much tougher time, because in the middle of that you have to put your best game face on. It was difficult. A lot of that shit hurt and it was very bewildering because it was difficult to connect it to your own reality. For better or worse, it got a good debate started."

In December 2012, METALLICA made all nine of its studio albums, as well as various live material, singles, remixes and collaborations, available on Spotify.

METALLICA is now able to make these deals directly since, as of 2012, the band has complete control over the master tapes of all its audio and video recordings. The band has also launched its own label, Blackened Recordings.