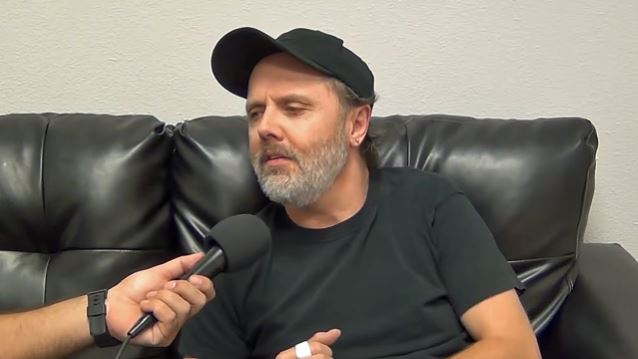 Lechon Atomico of Mariskal Rock TV conducted an interview with METALLICA drummer Lars Ulrich before the band's October 26 concert in San Juan, Puerto Rico. You can now watch the chat below.

Asked if fans can expect to see METALLICA perform any MOTÖRHEAD covers as a tribute to Lemmy Kilmister at any of the upcoming concerts, Lars said: "Hopefully. I think everybody knows what a significant role Lemmy played in METALLICA's existence, in my life, the life of the band. Obviously, MOTÖRHEAD's music has played a significant part, so I think that that will definitely happen. There's a song on the new [METALLICA] album ['Hardwired… To Self-Destruct'] called 'Murder One' that also is a little bit of a nod in Lemmy's direction, at least lyrically. So Lemmy is in our hearts and in our souls and in our thoughts all the time, and I'm sure that there'll be plenty of tributes to him along the way in the next few years."

The aforementioned METALLICA song "Murder One" uses many of Lemmy's songtitles in the lyrics. METALLICA frontman James Hetfield stated about the track: "'Murder One' was the name of [Lemmy's] amplifier, his favorite amp on stage. And I loved being murdered every night by that thing, man. He was just such an icon, such an inspiration to us as a band. There's certainly no way we'd be around if there was no MOTÖRHEAD. And, you know, to see your idol, your immortal one, actually be mortal, it hit us pretty hard. So I felt, lyrically, it makes sense to acknowledge him and how much he's meant in our lives."

During the September 26 Town Hall event at SiriusXM's New York studios, Hetfield stated about the inspiration for "Murder One": "MOTÖRHEAD had a lot to do with METALLICA sitting here right now. But just Lemmy as an entity, as kind of a father figure, he helped us a lot. He was unafraid. And he was a character. And he was himself. And we all respected that so much. He did his own thing to the last breath. No matter who you are, how could you not be inspired by that?"

"In the summer of 1981, I followed MOTÖRHEAD around on tour," Ulrich added . "That was what made me want to be in a band. When I came back to Southern California and called up James and said, 'Listen, we've got to give this a shot,' ... MOTÖRHEAD is the catalyst."

"Murder One" is featured on METALLICA's new album, "Hardwired... To Self-Destruct", which is due out November 18. The effort consists of two discs, containing a dozen songs and nearly 80 minutes of music.