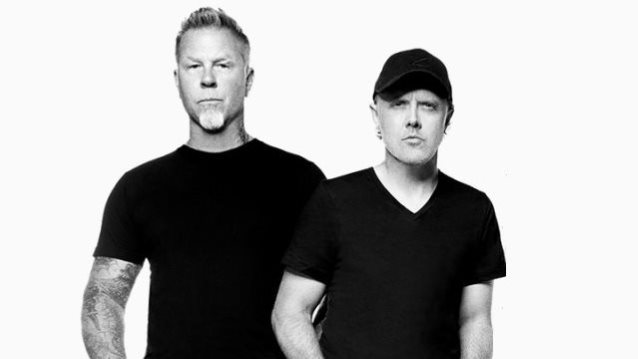 METALLICA drummer Lars Ulrich, who has made no secret of his liberal views, was asked in a brand new interview with Vulture if he ever discusses politics with frontman James Hetfield, who has described himself as being somewhat conservative politically. "I swear to you, I talk to James Hetfield about most things on this planet, but I don't think I've ever willfully had a political conversation with him," Lars responded. "We've spent 35 years together, and obviously we've been in the same room when the conversation went toward politics, but James and I sitting down in a room and discussing our particular views on something like affordable health care? Never happened."

Asked if it doesn't seem weird to work with someone for 35 years and never talk about politics, Lars said: "The thing you've got to understand is that METALLICA is made up of four people from four different places who took four very different paths to where we are now. The one thing that unites us is the love of the music that we're playing and that all four of us felt like outsiders trying to figure out who the hell we were. We didn't come together because we were questioning this in the culture or that about politics. We came together because we were all a little lost and trying to get a sense of belonging to something bigger than ourselves. I'll sit and talk politics with you all night, but I don't necessarily feel the need to do it in an interview. METALLICA is a collective, but we've just never been the kind of band to sit down and say, 'Okay, what's our common view of the world?'"

Ulrich also talked about his own personal view of the world these days. He said: "I grew up in a functioning social democracy. I grew up on affordable health care in a country where the word 'we' is more popular than the word 'I.' So, trust me, I have my opinions about this stuff, but I don't really need to shout it from the rooftops. Maybe one day I will, and there are times when it's difficult not to. I'm stunned about how truth and facts have become obsolete, and how if someone sees something they don't like, they just say 'the media made that up.' But I get plenty of shouting done about this stuff in my personal life."

Ulrich made headlines in October when he said that he would consider returning to his native Denmark if Donald Trump won the election. Ulrich, who moved to the U.S. in 1980 at the age of 17, told Danish outlet Ekstra Bladet: "I am a 100 percent Danish citizen, I pay taxes in the U.S.A. but I can't vote in America." He added, "Sometimes I think about moving home to Denmark ... If Trump becomes president and everything goes to shit, I might make my way to the airport and ask if I can get back in again."

Hetfield recently told BBC 6 Music that METALLICA stays away from topics like politics or religion in its music because "that just seems to polarize people even more. We all have our own beliefs, but at the end of the day, we're trying to connect with people and it seems like political views don't do that as much as music does."