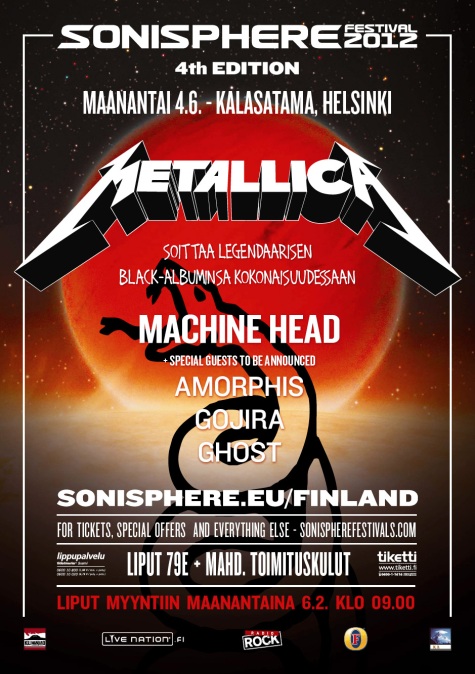 METALLICA will headline this year's installment of the Finnish edition of the Sonisphere festival, set to take place June 4 at Kalasatama in Helsinki. Also scheduled to appear are MACHINE HEAD, AMORPHIS, GOJIRA and GHOST.

Tickets go on sale on Monday, February 6 at 9:00 a.m. at Lippupalvelu.fi and Tiketti.fi.

METALLICA will play the "black album" — its 1991 self-titled fifth effort that has sold nearly 16 million copies — in its entirety at selected European festivals, including Sonisphere, this summer.

METALLICA's four-song EP called "Beyond Magnetic", which was made available digitally last month, will be released as a physical CD on January 31 (one day earlier internationally). The effort consists of the quartet of previously unheard tracks that the band unveiled in concert last month during its 30th-anniversary celebration. All four tunes — "Hate Train", "Just A Bullet Away", "Hell And Back" and "Rebel Of Babylon" — were recorded during the sessions for the band's 2008 "Death Magnetic" album but left off the final track list.