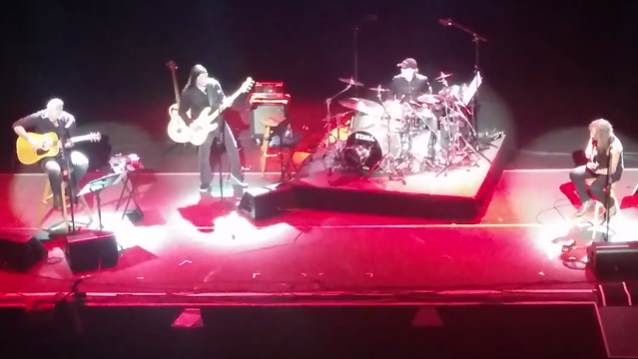 METALLICA performed a four-song acoustic set on May 12 at the 10th anniversary MusiCares MAP Fund benefit concert at Club Nokia in Los Angeles. This year's honorees were BLACK SABBATH singer Ozzy Osbourne and Village Studios owner and CEO Jeff Greenberg. Also performing were Keb'Mo and Slash, the latter of whom joined Ozzy and his touring band onstage.

Multi-camera video footage of METALLICA's performance — featuring professionally recorded audio from LiveMetallica.com — can be seen below.

METALLICA's James Hetfield got sober in 2001 and was honored by MusiCares himself in 2006. He told The Pulse Of Radio a while back that it wasn't until his wife literally threw him out of the house that he realized he needed to get help. "It started off for the kids, then it became more for me, and eventually, you know, the band came in and saw me there and it was for the band as well, but I knew that I had to get healthy or else everything would go away," he said. "And it did. But it took hitting a bottom to do that. So I'm extremely grateful for my wife for pushing hard like she did."

METALLICA said in a statement, "We are so proud to be a part of the tenth annual MusiCares MAP Fund benefit concert . . . It's no secret that Ozzy has been a major presence throughout our entire lives and we are so humbled and honored to be with Ozzy for this special evening."

Ozzy was honored with the Stevie Ray Vaughan Award for his dedication and support of the MusiCares MAP Fund and his commitment to helping other addicts with the addiction recovery process.

Greenberg received the From The Heart Award for his unconditional friendship and dedication to the mission and goals of the organization.

All proceeds benefit the MusiCares MAP Fund, which provides members of the music community access to addiction recovery treatment regardless of their financial situation.