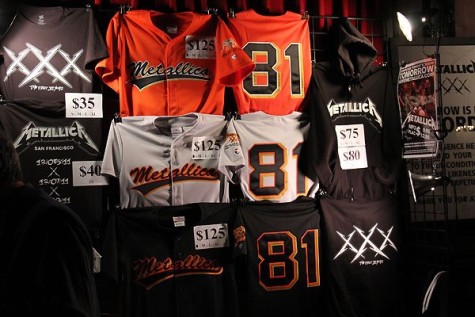 METALLICA has posted a 33-minute video recap of the second of four intimate shows at the Fillmore in San Francisco as part of the week-long celebration of its 30th anniversary as a band for fan club members only. Check it out below.

After opening sets from THE SOUL REBELS brass band and ARMORED SAINT, as well as an appearance by ANTHRAX guitarist Scott Ian — who took to the stage with METALLICA guitarist Kirk Hammett to tell stories of hanging out with late METALLICA bassist Cliff Burton — METALLICA rocked the capacity crowd with a 20-song set which featured selections from all periods of the band's career, including a previously unreleased track from the "Death Magnetic" sessions called "Just A Bullet Away".

Frontman James Hetfield told The Pulse Of Radio that METALLICA hoped to make the shows special for the people attending. "It is a fan celebration — everyone who's come along the METALLICA ride for 30 years — and we're constantly wanting to give to the fans what they don't normally get from some other band or some other connection," he said. "So these four shows at the Fillmore are something like that."

The other three shows took place on December 5, December 9, and December 10, with special guests and events, rare songs, varied set lists and more.

METALLICA plans to begin work on its next studio album early in 2012. The group recently released its collaborative album with Lou Reed, called "Lulu", which flopped saleswise and earned the quartet the worst reviews of its career.

The band has booked several European shows next summer, including one at a venue in Denmark that used to be a prison, at which it will perform its self-titled 1991 effort, a.k.a. "the black album," in its entirety.

METALLICA was formed when Ulrich, who had moved to Los Angeles from Denmark, placed an ad in a local paper called The Recycler looking for other musicians to play with. The ad was answered by guitarists James Hetfield and Hugh Tanner of the band LEATHER CHARM.