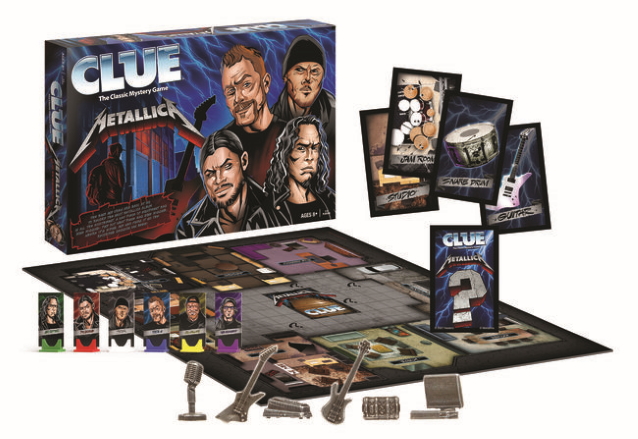 METALLICA has partnered up with one of the most iconic American mystery games, Clue.

Picture this: The band and crew are back at HQ to record METALLICA's next album, but with all the excitement, a key piece of equipment has gone missing. As the hours tick by, the group grows more and more eager to begin. They decide to split up and scour the building for any trace of their missing equipment. Find out what piece has gone missing, where it’s hiding, and who finds it so the recording session can get back on track!

The artist behind Metallica Clue, Maxx242, stated about his involvement with the project: "We were mostly given the specs for the production of the game, as well as the storyline, which is very similar to the classic game. Oh, I did receive images of their headquarters. That was awesome to see.

"Even with such an elaborate project, the METALLICA team always allows us artists to add to their story and just create and be artists. It was an amazing experience to help create this game with them."

Developed during WWII by a British solicitor, the popular murder-mystery board game was patented under the name Cluedo (a blend of clue and Ludo, the name of a 19th century board game that's Latin for "I play") in 1947, and then sold in North America under the name Clue starting in 1949. Several games, books, and a film have been released as part of the Clue franchise.