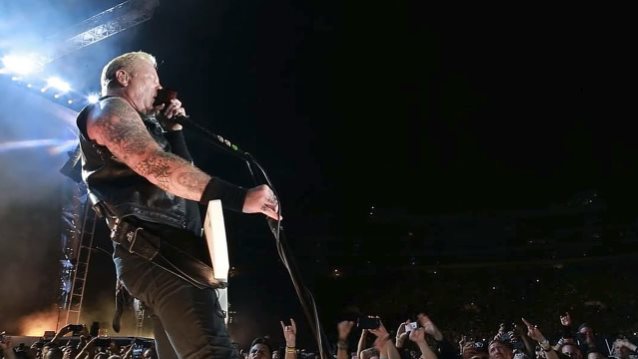 METALLICA performed an abbreviated cover version of VAN HALEN's classic song "Runnin' With The Devil" Saturday night (July 29) at the Rose Bowl in Pasadena, California. The one-minute nod to the hometown band saw METALLICA frontman James Hetfield attempting to replicate those iconic David Lee Roth screams, much to the delight of the packed stadium. "That's all I can sing," he proclaimed to the crowd after the impromptu rendition ended. "That's a little homage to the Pasadena boys," he continued. "Sorry you had to put up with that. METALLICA guitarist Kirk Hammett then launched into the opening riff of "You Really Got Me", with Hetfield adding, "That wasn't too bad. That was kind of fun."

METALLICA's professionally filmed footage of the "Runnin' With The Devil" cover, along with a fan-filmed clip, can be seen below.

A few years back, Hetfield and METALLICA bassist Robert Trujillo spoke about the impact VAN HALEN had on them when they were teenagers in Southern California.

"I remember hearing on some radio station that VAN HALEN's [first] album was coming out," Hetfield recalled. "[I was like], 'Whoa! What is that? It's crunchy.' That really made my hair stand up. Back when I was growing up, VAN HALEN was the heaviest we had in California." Trujillo added: "I remember hearing ['Eruption'] blasting and thinking, 'What is that?!'"

METALLICA and VAN HALEN toured the U.S. together in 1988 as part of the "Monsters Of Rock" package, also featuring SCORPIONS, DOKKEN and KINGDOM COME. Hetfield later said about the trek: "That whole 'Monsters Of Rock' tour was a big fog for me. Those were my Jägermeister days. It was bad coming back to some of those towns later, because there were a lot of dads and moms and husbands and boyfriends looking for me. Not good. People were hating me, and I didn't know why…"

The North American leg of METALLICA's "WorldWired" trek will hit stadiums in seven more cities before ending in mid-August.

The next stop on the tour is Phoenix, Arizona on August 4. 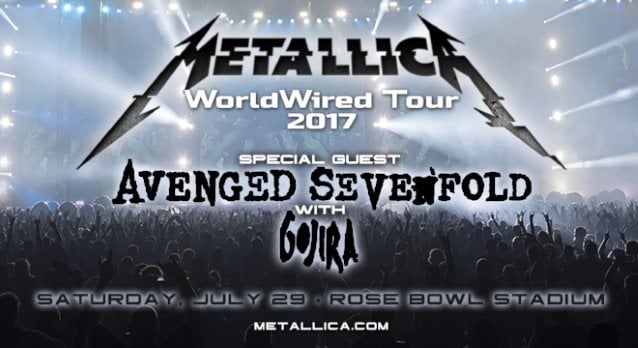