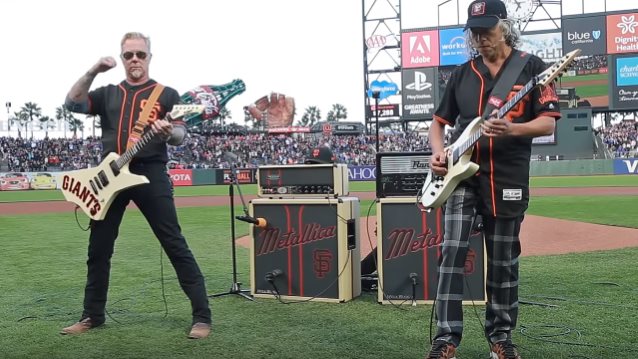 METALLICA and the San Francisco Giants held the fifth annual "Metallica Night" earlier today (Monday, August 7) at AT&T Park in San Francisco as the Giants took the field against the Chicago Cubs. METALLICA once again threw out the first pitch and James Hetfield and Kirk Hammett performed a version of "The Star-Spangled Banner". Hammett also played an instrumental solo rendition of "Take Me Out To The Ballgame".

Special-event METALLICA ticket packages included a ticket to the game and a limited-edition METALLICA/Giants T-shirt, with a portion of the proceeds from every special-event ticket sold benefiting the Posey Family Foundation. There was also an exclusive VIP event that night in Triples Alley with METALLICA drummer Lars Ulrich hosting a pre-game question-and-answer session with tennis coach, commentator and author Brad Gilbert to talk sports, music and more.

"We are fortunate enough to live in the Bay Area and hook up with the Giants," Hetfield told local rock station Live 105 back in 2015 about the tradition. "They are a bunch of local boys doing good and we are hopefully in the same department as that. It's basically a fun night. Local people. Local music."

Take Me Out to the Ballgame, Metallica style 🎸🎶