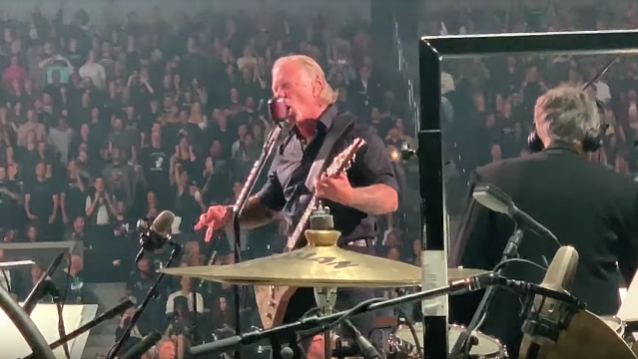 Last night (Friday, September 6),METALLICA played the first of two shows with the San Francisco Symphony for the grand opening of Chase Center, the new home of the Golden State Warriors.

The concert, conducted by Edwin Outwater with a special appearance by Michael Tilson Thomas, marked the 20th anniversary of METALLICA's first performance with the symphony at the Berkeley Community Theater in 1999, which resulted in the live album "S&M" (Symphony & Metallica). A film of this month's concerts (including Sunday's performance at the same venue),called "S&M²", will arrive in theaters worldwide on October 9.

Friday's show drew 16,000 fans and saw the four members of METALLICA playing on a circular, revolving stage in the center of the arena floor, surrounded by 75 members of the Symphony and Outwater, according to the San Francisco Chronicle.

The three-hour concert was split into two parts and included a rendition of "Anesthesia (Pulling Teeth)" from METALLICA's debut album, "Kill 'Em All", performed as a solo by the Symphony bassist Scott Pingel in tribute to METALLICA's late bassist Cliff Burton (whose 94-year-old father was in the audience).

Drummer Lars Ulrich told the audience at one point: "There is no place on this planet METALLICA would rather be tonight than here with you."

Earlier in the week, Ulrich said that the biggest challenge of collaborating with the symphony is "not being completely fucking intimidated by all these incredible players and incredible musicians.

Back in March, METALLICA fans took to Twitter to express their outrage after the pre-sale for the "S&M²" show ended within seconds due to bots grabbing all the available tickets.

The first ever setlist at @chase_center! And night one of #SandM2 is in the books. pic.twitter.com/aHg20IlN5Z