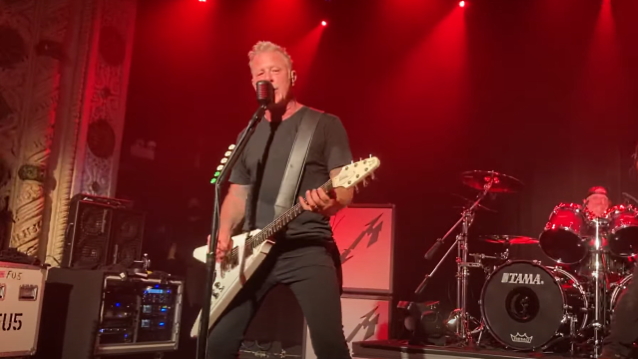 METALLICA played a "pop-up concert" at Metro in Chicago Monday night (September 20). The venue made the announcement at 1:30 p.m. and within an hour, the show was completely sold out. The tickets sold for just $19.83, a reference to the year 1983, which is when the band last appeared at Metro.

METALLICA, which played a "surprise" concert at The Independent in San Francisco last Thursday (September 16),announced the Chicago concert on social media, writing: "THAT was way too much fun last week as we finally played in front of real live fans for the first time in over two years in our hometown of San Francisco. So why not do it again. This time we're in Chicago and we'll be hitting the stage at the storied Metro on Clark Street tonight... our first time back there since 1983!!"

METALLICA will return to the festival stage on Friday, September 24 and Sunday, September 26, when they are scheduled to play a pair of unique sets in Louisville, Kentucky at Louder Than Life, the first of three U.S. festivals the band will perform this fall in partnership with promoter Danny Wimmer Presents.