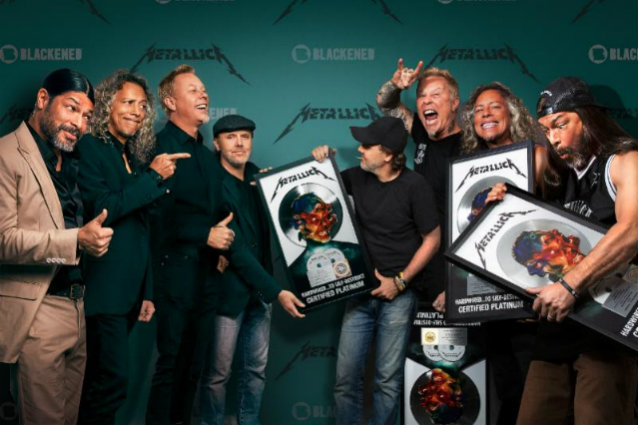 METALLICA Presented With Platinum Plaques For 'Hardwired… To Self-Destruct'

METALLICA's latest album, "Hardwired… To Self-Destruct", was certified platinum on April 12 by the RIAA (Recording Association Of America). The members of the band were presented with their plaques by "executives" from their record label, Blackened Recordings, on May 17 at The New Coliseum Presented By NYCB in Uniondale, New York.

The North American leg of METALLICA's "WorldWired" 2017 tour kicked off on May 10 in Baltimore, Maryland and is hitting stadiums in 25 cities before winding down in mid-August. Support on the quartet's first North American trek since 2009 is coming mainly from AVENGED SEVENFOLD and VOLBEAT, with GOJIRA taking over for the latter group for the last six shows.