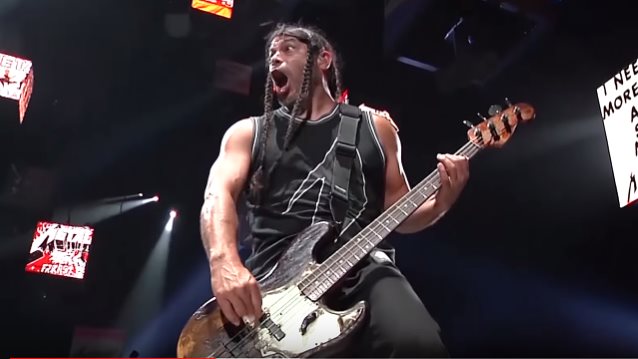 Professionally filmed video footage of METALLICA performing the song "Damage, Inc." on September 6 at Ziggo Dome in Amsterdam, Netherlands can be seen below.

As previously reported, METALLICA will reissue its third album, "Master Of Puppets", on November 10 via the band's own Blackened Recordings. The LP has been remastered for the most advanced sound quality and will be available in various digital and physical configurations.

The "Master Of Puppets" reissue will be available physically as a Standard LP, Standard CD, 3 CD Expanded Edition, and Limited Edition Deluxe Box Set and digitally as a Standard CD (available to stream and download),a 3 CD Expanded Edition (available for download only),and a Digital Deluxe Box Set (available for streaming and download). The Expanded Edition will include previously unreleased demos, rough mixes, interviews, live tracks, and a 28-page booklet. The Limited Edition Deluxe Box Set will include a 108-page hardcover book including never before seen photos, outtakes and previously unreleased interviews, three LPs, ten CDs, a cassette, two DVDs, a lithograph, a folder with handwritten lyrics, and a set of six buttons.